'The Lighter Side of China' 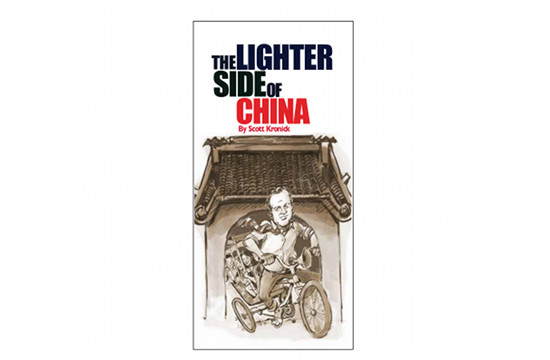 “The Lighter Side of China” by Scott Kronick, 19-year China veteran businessman and President and CEO of Ogilvy Public Relations, Asia Pacific, was published today by ACA Publishing Ltd. The book, a compilation of Kronick’s “Lighter Side of China” columns that ran on “thebeijinger.com” throughout 2012, reveals the everyday entertaining life experiences that expats may face when living in China.

Chapters covering such topics as ‘Holiday Traditions,’ ‘Lost in Translation,’ ‘Marital Advice for Mixed Marriages,’ ‘Feng Shui,’ and ‘Brands and Their Copies’ make up some of the 25 chapters of the book that depict the crazier experiences one might have in this never-a-dull-moment country.

In the chapter on English Names & The Chinese, Kronick writes:

"I sought to understand everything about the Chinese and became fixated on the English names the Chinese gave themselves. I wondered why a colleague in our advertising office would call himself “Billboard” Kwok. Or why my slightly heavyweight boss called himself “Beef ” Chen. Or why the advertising creative team donned such names as “Jesus” Yeh and “Devil” Zhou and, in case you had a question, you could ask for the Creative Director “If” Chen. For those who wonder where these names come from, there are a variety of influences."

Jaime FlorCruz, longtime China watcher and correspondent said, “Kudos to Beijing old-timer Scott Kronick for his personal chronicle of living in China. It’s instructive and comic, often at his expense. It’s at times sardonic and at times moving, but always genuine.”

James McGregor, author of One Billion Customers added, “Scott Kronick is a keen observer and insightful adventurer who through two decades in China has never lost the sense of humor and sunny soul he arrived with. With this collection of personal stories Scott grabs your hand and takes you for an intimate and affectionate stroll across the foreigner-living-in-China landscape. This book will put a smile on your face and bring comfort to your heart.”

“Of all the business, political and travel books that have been written on China, few have explained the nuances of everyday life. That is what I have tried to do in a fun and entertaining format,” commented Kronick.

“The Lighter Side of China” appeals to not only those that have spent time in China and that will recognize many of the funny situations from their own experiences but also China watchers, students, and professionals working at the intersection of culture and business in China and elsewhere. The vivid descriptions of life in the country also mean that travelers will find the book both entertaining and informative.