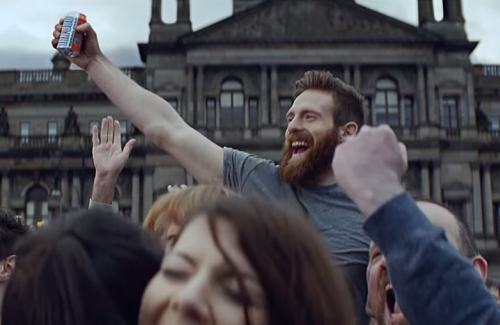 IRN-BRU’s new TV campaign launches in support of the Glasgow 2014 Commonwealth Games. Capturing the essence of what it means to be a Scottish supporter, the BORN TO SUPPORT campaign is the brand’s celebration of the world’s greatest supporters. Scottish supporter’s passion and unyielding support for their teams is unrivalled the world over and it is this spirit that IRN-BRU will celebrate in the run up to and throughout the Glasgow 2014 Commonwealth Games. Scottish fans’ eternal optimism, talent for friendly banter and never taking themselves too seriously makes them the gold medallists of supporters. And when we win, we know how to party...

As an official sponsor of the Glasgow 2014 Commonwealth Games, IRN-BRU’s new TV advert kicks off a wider multi-media campaign tonight ( which will even see IRN-BRU hijack fish and chip wrappers throughout Glasgow city centre), rallying the nation and bringing to life the spirit and sentiment of Scotland’s BORN SUPPORTERS. The brand’s unique, uplifting sense of humour coupled with a rousing poem that will stir pride in Scottish supporters, makes this ad ‘a must-see’ for BRU fans and Scots young and old.

Highlights of the TV advert include a crowd of rowdy pensioners at a game of lawn bowls, a maternity ward full of new-born babies raising foam fingers in support and a rousing scene in a packed Glasgow George Square filled with supporters.

Adrian Troy, Head of Marketing for A.G.Barr, said: “The Glasgow 2014 Commonwealth Games is set to be an unforgettable event that we are incredibly proud to be a part of and as such it is deserving of a really special ad that captures the mood of the nation and reflects what it means to be a true Scottish supporter”