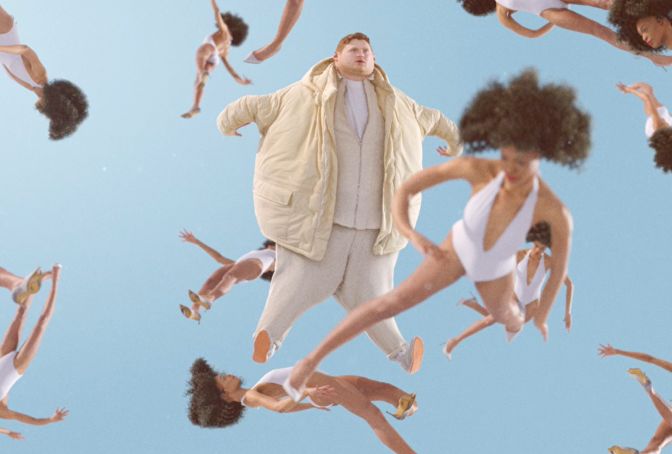 Set within a surrealist landscape, the playful promo sees the band embark on an epic, seemingly infinite skydive as they are depicted floating amongst hundreds of mini 3D clones of themselves.

Upon their journey, they collide with giant, unattainably beautiful women, a nod to the lyrics of the song, in which the band make fun of their inability to gain the attention of alluring females.

Mill+ directors bif explain, "With an open brief to work from, we wanted to create a provocative and elegant quest to Love but in a cheeky and fun way, a play with the cliche within the song. In terms of the overall art direction, we set out to create a strong surrealist contrast between the pristine blue sky and the characters which are seen falling through it; creating an iconic dreamlike world in the process. The idea was to shoot the girls as if they were gigantic, untouchable statues with the two front men floating around them. The result is an endless crazy skydive jump which presents the Shy Luv duo and their clones on a provocative and elegant quest for love, as if they were puppets travelling through a surreal landscape."

On the technology and creative techniques behind the project bif continue, "This project provided us with the opportunity to experiment with more traditional VFX techniques alongside new methods. Only 30% of the shots are in-camera, meaning 70% are entirely CG - the challenge was to ensure that whilst the forms of the 3D models transform throughout the promo, their essence remained the same. Using the latest photogrammetry scanning equipment we were able to recreate a perfect 3D model of each character. Most of the complex and dynamic movements which are achieved in the film were created using classic simulation methods but, having created such accurate 3D models, we were able to maintain a sense of hyper-realism."

Mill 2D Artist Rebecca Clay comments, "It was great to work so closely with bif, rather than being bound by an offline, they were flexible with the cut and what worked best during the compositing process. Getting instant feedback from them meant we could get to a point where they were happy with the look much quicker, it was a really fun job to work on."

Mill Colourist Mick Vincent comments, "This was a really interesting project to look at from a colour perspective. I hadn’t worked with 3D scanned bodies which looked and felt the way these unique models appeared before. Working closely with bif, we decided to keep the grade as sympathetic to it’s original iconic, surrealist look as possible, so as to not detract from the already complex imagery in play. I spent a lot of time ensuring that the skin tones of the CG models and the real skin of the models matched up, adding textures and mixing tones to ensure they appeared to look as realistic as possible. I also changed the density of the CG bikini worn by the singer, again to ensure a sense of authenticity."