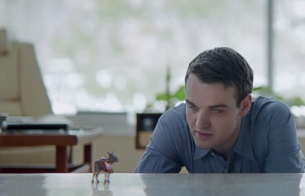 GE has launched the latest chapter in its ongoing efforts to demonstrate its commitment to the pursuit of ideas and invention that can help change the way industry works, change people's lives and, even, change the world.  It follows and builds upon the success of last year's popular content films  “Childlike Imagination” "Ideas are scary" and "Boy who Beeps”.

The new campaign tells the story of "Invention Donkey" - an inspirational character who has actually been around throughout the history of invention.  Only he's gone unnoticed because he is so small. But not anymore.

Backed by a robust digital campaign, viewers will now discover how GE's Invention Donkey is like The Invention Whisperer, providing inspirational quotes to inventors, with messages on YouTube, Facebook, Twitter, Snapchat and more.  His first digital message will appear on April 2 and will fully immerse people in his world of wisdom and invention.  On Twitter, he will take over GE's account and provide custom video responses to selected Twitter users.  It's a fun spin on a serious subject, showing how invention is part of GE's DNA; how GE works on things that matter to deliver outcomes that make the world work better.

It's also another demonstration of GE storytelling at work, building an emotional connection with its audience while appealing to inventive minds and other people who might consider GE to build a career because its values are on par with their own.

The new campaign was created by BBDO New York, GE's long-time creative agency partner.  It can be seen by clicking on the link below.  The program is expected to live online through the end of May.