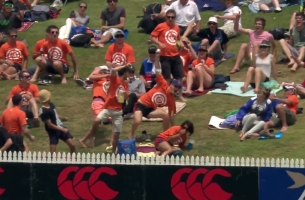 The Gunn Report has released Cases for Creativity 2014, a study that identifies the campaigns that have won both a Cannes Gold Lion for creativity and a Gold Effie for effectiveness.

Representing the high watermark of advertising achievement, 12 campaigns have accomplished such a feat in 2014 and show the ability for creativity in all its forms to drive extraordinary results. Included in the list is ‘Catch a Million’, a campaign created in partnership between client DB Breweries, part of the Heineken Group, Saatchi & Saatchi New Zealand and Apollonation.

Saatchi & Saatchi New Zealand’s joint ECD Corey Chalmers said: "Winning a gold Cannes Lion and a gold Effie for the same campaign is the ultimate accolade in our business – high creativity delivering real results, by impressing consumers as much as jurors. We're thrilled that DB has been recognised for their boldness, imagination, vision and collaborative spirit."

The Cases for Creativity 2014 are:

4. “Catch a Million” for DB Breweries by Saatchi & Saatchi and Apollonation, New Zealand

9. “Share A Coke” for Coca-Cola by Ogilvy & Mather Sydney, Australia

10. “The 1000 Miles of Luca” for Consejo Publicitario Argentino by TBWA, Argentina

12. “The Unlaunch of the Volkswagen Kombi” for Volkswagen by Almap BBDO, Brazil

Author of the study, James Hurman, founder of the Auckland based innovation consultancy, Previously Unavailable, says, “Effectiveness continues to defy media categorisation, but the one thing this diverse group of ideas have in common is that people saw fit to share them, and only the most engaging creative ideas executed by the most talented people will be shared.”