The Gujarat FortuneGiants Roar In This Rousing Kabaddi Promo 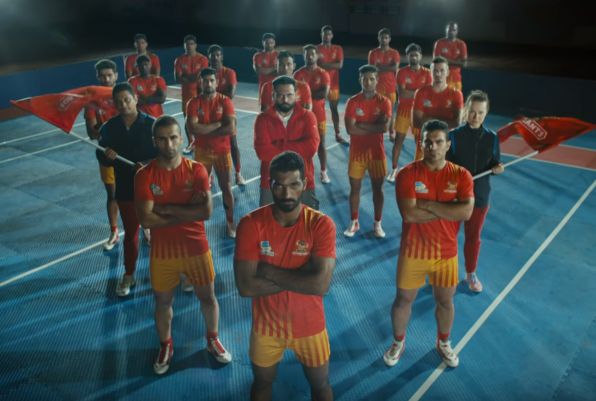 The vibrant Indian state of Gujarat has always been appreciated and admired for its many aspects- from its rich cultural heritage to its booming business community. However, this state has almost never made news for its active participation in sports and associated activities. Adani Wilmar, Indian multinational conglomerate, broke this pattern with the launch of Gujarat’s very own Gujarat FortuneGiants in the ongoing season of Vivo Pro Kabaddi League.

With the beginning of the game’s new season, DDB Mudra West wanted to introduce Gujarat FortuneGiants to the Kabaddi followers and enthuse them to show passion and support towards the team. This very intent was fulfilled by #GarjegaGujarat (Gujarat Will Roar). This anthem not only reflected the spirit of the team but also the spirit of the state they represented. The term ‘Garjega’ (roar) finds its inspiration in the famous Asiatic lions of Gujarat. The theme of the anthem strictly adhered to the phrase ‘Garvi Gujrat’ (pride of Gujarat); a term which never fails to evoke a sense of pride in every Gujarati. The anthem was also designed to leverage the popularity of the game of Kabaddi over other popular games. Laced with catchy contemporary beats composed by ace music directors Salim-Sulaiman and voiced by legendary Sukhvinder Singh and Kirtidan Gadhvi; the anthem saw an exclusive launch on Radio Mirchi.

The film for the anthem stays true to creating this new wave of enthusiasm. It began with a child being lightly teased for his wonderment towards Gujarat’s non participation in Kabaddi. It later progressed towards portraying various iconic locations of the state like the Siddhi Saiyad Jali at Jama Masjid, the famous step wells, Sabarmati Ashram and the characteristic streets and junctions of the state which flaunt the bequeathed heritage. All leading to introducing the team- Gujarat FortuneGiants.

Also giving the anthem its due mileage was 22feet Tribal Worldwide, which aptly promoted it on digital and social mediums. The agency created the team’s website and online communities on the digital front. The team's social media platforms were given a unique look and feel which within a month led to a fan base of over 150,000 followers on Facebook.

Through focused audience targeting, the agency has been reaching the fans effectively and their work has even trended on Twitter in India on the same day as the launch of the team’s anthem. The players and officials have been given a celebrity status to acquaint fans of the team to their new heroes, while the team's buildup to the tournament has been captured through daily updates in image and video formats on the social media.

The agency has also been managing the team's media and influencer marketing efforts; facilitating the growth of both the game and the team's stature in target markets. The social media channels have also been providing a live coverage of the games as well as the happenings off the field.

All these efforts are being supported by DDB MudraMax which has been constantly managing everything for the team; right from the stadium branding for home matches to venue management to logistics of the team.

Quoting on group’s work, Rahul Mathew, National Creative Director, DDB Mudra Group, said, “It’s not always that one gets an opportunity to build a brand from the idea itself. Gujarat FortuneGiants has been one such opportunity for the DDB Mudra Group. We got to showcase our strength as a group – right from branding to design to sports management to community building to communication. We are partners to the Adani Wilmar’s Gujarat FortuneGiants at every step of the way. And it’s great to see our brand become such a roaring success, both on the court and off it. It has truly been a case of #GarjegaGujarat.”