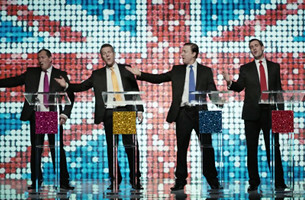 The broadcast was created by Creature of London and directed by Acne’s Johnny Hopkins, and marks Creature’s second piece of work for the Green Party, after they released a satirical film ahead of last year’s European elections.

“The Greens are the progressive alternative voice we need in politics. With this in mind we’ve created a broadcast that we hope goes some way to making that voice louder,” says Stu Outhwaite, Creative Partner at Creature of London.

Natalie Bennett, Leader of the Green Party of England and Wales, adds: “For many years the Establishment parties have been singing from the same hymn sheet…The Green Party is offering a real alternative to business-as-usual politics.”

Eclectic were approached to help write the music to accompany the lyrics that were written by Creature of London. Eclectic’s Colin Smith comments: “The key was to make it sound as convincing as possible. This helps elevate the lyrics and increase their comedy value in that context. You also have to ensure all the comedy and ad libs are in the right place.”

Eclectic’s Simon Elms adds: “A project like this is great to work on. The guys at Creature wrote fantastic lyrics and helping them to find the right composition to bring it to life was an honour and a lot of fun!”

The film concludes with a simple but important message, ‘Get Involved’ and #changethetune. It first be broadcast at 17.55 on BBC2 Thursday 9th April and will be supported by outdoor and social.