The report is a collaboration between ACT Responsible and Gunn Report 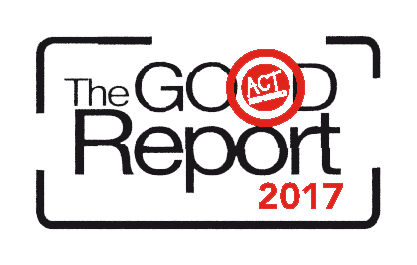 The Good Report is a unique ranking of the world's best use of creative communications to promote sustainability and social responsibility to raise awareness of major social and environmental issues. It is created in collaboration between ACT Responsible, the international non-profit association and largest global source of the world's best ads on social and environmental issues, and Gunn Report, the global index of creative excellence in advertising.
Now in its fifth year, a total of 1045 campaigns produced by 680 agencies for 850 advertisers from 80 countries were evaluated for this latest Good Report. The ranking is created by combining the industry's recognition with the performance measured by the Gunn Report, as well as the promotional effort behind the campaigns and the general public's recognition from public votes organized by ACT Responsible. There is no complicated criteria or categories, just great work for Good.
The Good Report 2017 is made-up of 40 campaigns, of which 31 are for NGO's, institutions and foundations and 9 are for commercial brands. The top 25 agencies are made up of three independents and 22 networked agencies. In the top 20 Networks list there are three independent networks and 17 networks owned by holding companies; and the top 10 Advertisers include six NGO's/Institutions and four for-profit companies.
Taking the top places are:
Most successful Campaigns promoting good causes 2017
#1 Fearless Girl, McCann New York - State Street Corporation
#2 Switch it off, Ogilvy Germany, Berlin - Amnesty International
#3 Meet Graham, Clemenger BBDO Melbourne - Transport Accident Commission
#4 Evan, BBDO New York -  Sandy Hook Promise
#5 The First Braille Smartwatch, Serviceplan Germany - Dot Incorporation
Most successful Agencies promoting good causes 2017
#1 - BBDO New York - USA
#2 - McCann New York - USA
#3 - Ogilvy Berlin - Germany
#4 - Clemenger BBDO Melbourne - Australia
#5 - Serviceplan München - Germany
Most successful Networks promoting good causes 2017
#1 - BBDO Worldwide
#2 - FCB Worldwide
#3 - McCann Worldgroup
#4 - Ogilvy & Mather Worldwide
#5 - Young & Rubicam Group
Most successful brands promoting good causes 2017
#1 - Amnesty International
#2 - WWF
#3 - UNICEF
#4 - Red Cross
#5 - Greenpeace
Act Responsible considers that advertising recognition is too often confined to its commercial side; and that the other part of its role, such as informing, raising awareness and educating, is often forgotten.
For 17 years now, Act Responsible has collected the best ads promoting sustainability & social responsibility in order to highlight the use of creativity to raise awareness of the world's major issues. Still, hardly any specific recognition is offered to agencies that give time and talent to support the communication of public interest causes. Nonetheless, the commitment of communication professionals to these causes is fundamental; good causes need campaigns to create awareness of their existence.
Act Responsible has created «The Good Report» in collaboration with Gunn Report, to celebrate the wonderful work and dedication that thousands of agencies are making to support these major causes, in order to further motivate and inspire creativity as well as the continued production of new campaigns.
"With The Good Report, ACT Responsible continues its mission of promoting, inspiring and federating the communications industry for the greater Good. We truly believe advertising has a major role in educating and promoting good to help make the world a better place and we are proud the celebrate this work every year. Producing The Good Report with the collaboration of the Gunn Report Team is a great privilege" says Hervé de Clerck, ACT Responsible Dream Leader.
"Act Responsible honours the hugely valuable job our industry does, throughout the year in countries all round the world, in multiplying the impact and effectiveness of communications for Good Causes. The Good Report adds a commendable extra dimension to their mission and we are proud to be a part of it," says Emma Wilkie, managing director of Gunn Report.
View The Good Report 2017 list
To see The Good Report 2017 in full visit http://act-responsible.org/the-good-report/
The campaigns featured in The Good Report will be exhibited at the annual Act Responsible Expo held at the Cannes Lions 65th international festival of creativity in June.
view more - Trends and Insight