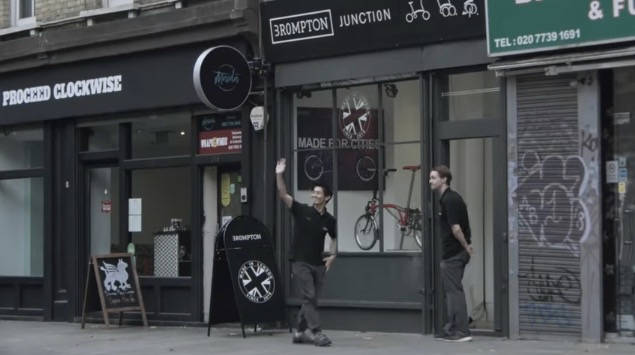 Australia-based The Glue Society has directed a new campaign for Hiscox Insurance through AMV BBDO, London.

One in three UK businesses have been affected by online hacking. And yet most do not how to protect themselves or know what to do if they fall victim to criminal activity.

Hiscox Insurance challenged its agency AMV BBDO to develop a campaign which brought this situation into the open.

The result was a real world version of hack activity on the unsuspecting staff of a London bike store - a project delivered by the all-Australian team The Glue Society in conjunction with UK production company, Biscuit Filmworks.

The experience was directed and edited by The Glue Society (who are represented by Revovler/Will O'Rourke in Australia) - which included the building of the replica store - with music and sound design by Groove Q.

To pull off the "Real World Hack", Hiscox secretly worked with senior execs at Brompton to surprise employees and passers-by at the brand's location in Shoreditch.

In one day, the staff watched with confusion as a mirror-image shop called '3r0mpton' opened over the road, mimicked its storefront, stole its customers and even created doppelgängers of its employees.

(If you're wondering why cameras were on hand to catch the reactions, staffers were told by their CEO that film crews would be there for the day working on a documentary about small businesses.)

The tactics used against Brompton (the UK's biggest bike manufacturer) conveyed the effects of a successful phishing attack, which can impersonate a business or executive and then siphon off everything from deliveries to customers.

At one point, a sudden and confusing crowd of customers descends on the Brompton team, representing how a distributed denial of service attack can overload a company's servers.

Finally, the scammers even board up the real Brompton location and demand payment to release it, simulating a ransomware attack.

Says Clark Edwards, CD, AMV BBDO: "Cyber crime lives in the shadows. It's faceless. Creating something physical to demonstrate the chaos it can bring felt like a fresh new way to talk about the problem."

As for why Brompton would go along with a stunt so disorienting to its own staffers, the bicycle brand hoped that illustrating a knockoff store would also create more consumer scepticism about off-brand copycats.

Says Will Butler-Adams, CEO of Brompton Bicycle: "When people copy us, with little understanding of the engineering and care behind the design, they are trying to fool our customers who may go on to buy a potentially dangerous product. We wanted to work with Hiscox to highlight these risks, as it is a serious issue and is not limited to the product but also to online cyber fraud, spam emails and viruses that hurt businesses and their customers alike."

Says The Glue Society's Jonathan Kneebone: "It often takes an enormous amount of effort to make something seem effortless - but in this instance, all the groundwork paid off. And the result went well beyond a prank into something with more serious overtones."