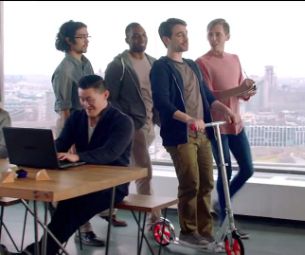 The Gate | New York launched a new TV campaign for Marcum LLP, one of the largest independent public accounting and advisory services firms in the US.  “Ask Marcum”, aimed at C-suite executives and entrepreneurs, consists of four 30-second spots, each depicting a decision-maker as they confront a complex business issue.  Some make the right decision because they ask Marcum first. Others are not so lucky and pay the price.

The campaign will air in multiple markets with programming focus on business and news including CNBC, CNN, Fox News and MSNBC. JL Media, Inc. is responsible for media planning and buying.

"Whether it’s a problem or an opportunity, CEOs have to make tough decisions every day," says David Bernstein, CCO, The Gate. "In our TV campaign, we show the differences between those who were smart enough to ask Marcum for advice and those who weren’t."

For Unicorn and Private Jet, we were looking for people who were more confident in their abilities than they should be. They’re guilty of hubris. And it leads to their downfall.

Takeover and Audit is really a confessional, a la House of Cards. These CEOs act smart and self-assured, but they really aren’t. They know they couldn’t have succeeded without Marcum, but they don’t want anyone else to know it."