The Future Of Advertising…In One Afternoon 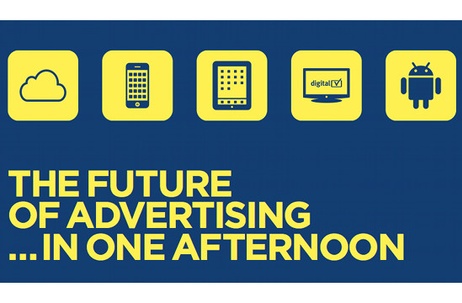 This week London’s Advertising Producers Association attempted to get to the bottom of a question that’s the source of much brow-furrowing, hand-waving and speculation within the industry – what does the future of advertising look like? And like the best questions, it’s one that has no right answer. Laura Swinton headed over to find out more.

On Wednesday London’s advertising and production community gathered at the British Academy of Film and Television Arts to tussle with some tricky trends and figure out how recent and future developments might impact upon their businesses. Curated by the APA, ‘The Future of Advertising… In One Afternoon’ brought together strategists, social media experts, pioneering creatives and media missionaries. Inspired by their recent delegation to Silicon Valley, APA members were keen to  discuss their own ideas about what shape this new landscape might take.

The afternoon started off with a strategic viewpoint. The Smithery’s John Willshire got philosophical, drawing from the likes of Marx, Sennett, Plato and a toilet paper brand mascot that tweets as it poops to explore how brands might be trashing the social media landscape. He questioned the types of conversations brands were able to have, noting that while most brand ‘conversations’ were all about consensus, social media is defined by the multiplicity of voices and opinions. He noted that big social media brands like Facebook were becoming less innovative and diverse as they sought to become more like ‘big brands’ in pursuit of revenue streams.

Next up – and unsurprisingly disagreeing with Willshire – was Twitter’s UK director Bruce Daisley. He discussed how brands could more effectively create social media advertising and content that felt more useful and less intrusive. “It’s about advertising that feels ‘native’ – which is a bit of a buzz-y word and it shouldn’t be,” he said. “The best advertising we’ve ever known has been native – fashion advertising in Vogue has always looked and felt like the content.”

From strategy to production wizardry – Nexus, Passion & Framestore took to the stage to talk real-time animation. From Nexus, Chris O’Reilly discussed creating real-time data visualisations and explained how the company had first tapped into the opportunities and potential in this area by working with motion graphics animations. However, he warned, these exciting new developments were not enough in themselves – filmmaking staples of storytelling and meaning would be needed to transcend the short-lived novelty of real-time.

Passion’s Neil Riley then outlined how the company had responded to requests from long-term clients and collaborators such as Gorillaz and Compare the Meerkat to develop their own real-time technology. He explained how the use of old school animatronic puppeteering and carefully streamlined gaming technology had resulted in a successful live interview with their iconic  Alexandr Orlov character. The tipping points for Passion’s breakthroughs had been the mastery of responsive CGI fur and work for the Channel 4 Charlie Brooker series Black Mirror which, in one episode, starred an animated bear mascot who becomes a political candidate. Issues like rendering quality remain – there’s only so much you can do in real time – but technology is improving all the time.

Framestore’s Simon Gosling rounded up the real-time session by looking at how real-time animation feeds into the real-time responsiveness of the social media environment. The talk was structured around the question ‘Was Max Headroom a prophet for the digital age?’ and compared the faux-CGI 1980s TV character with the real-time CGI mascots of the future. “Brands have always used mascots, like the Green Giant, but I think in the future they will use CGI, real-time human beings with their own YouTube channel and social media presence,” he concluded.

The second half of the afternoon was devoted to new media channels and evolving patterns of engagement. Suranga Chandratillake, founder and Chief Strategy Officer at Blinkx discussed how changing technologies are influencing the sort of media content possible and suggested that when it comes to Internet TV advertisers still have much to get their heads around. He explained that when it comes to second-screening or streaming TV shows online, people do tend to use the internet to carry out searches related to that particular show. However it’s an ad-hoc approach that is not necessarily well served by advertisers currently. “There’s an idea that people either lean back or lean forward – it isn’t true, they do both,” he said.

From theory to practice, Tom McDonnell from Monterosa took the audience through the ‘nitty gritty of creating content for the second screen’. After demonstrating  TV property examples such as the iTunes-topping Channel 4 Grand National app, he then explored the value for brands. He showed how simple, rewarding games and voting apps which feed data to live TV shows or ads can change the way people watch TV content.

Next up were MEC Global’s Jide Sobo who provocatively argued that the only way to be truly creative was to consider the mobile as the ‘first screen’. Finally Chris Goldson, Creative Sales Director at ITV talked the audience through a successful year for the channel, in terms of unusual and interactive forms of TV advertising.

The afternoon was rounded off by a lively and animated discussion of the APA delegation’s trip to Silicon Valley. The assembled panel included HLA’s Tim Daukes, Rattling Stick’s Katie Keith, Academy’s James Cunningham, Vermillion Films’ Lee Kemp and Jelly’s Chris Page and they shared their stories of San Francisco and explored how to translate what they learned to the business of producing commercials.

It was a thought-provoking afternoon and at the end of it no single answer was reached regarding the future of advertising – but, who needs one boring old answer when you’re surrounded by a multiplicity of ideas?