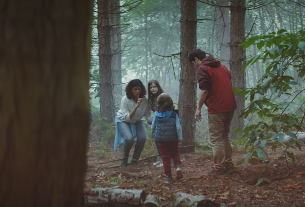 Leading short break expert Center Parcs unveils a new TV advertisement as part of a broader marketing campaign celebrating the forest as an immersive playground.  The new 50-second TV commercial launches on 21st December on the company’s Facebook channel, before featuring on TV from 23rd December.

The integrated campaign, which includes cinema, digital and VoD activity, as well as social, PR and at each of its five UK villages, is timed around the travel industry’s peak booking season as families start to plan their family breaks, and will run until March 2017.

The new campaign builds on the success of last year’s “Bears” campaign and the Center Parcs “Get Together Again” positioning.  Created by leading advertising agency Brothers and Sisters, the TV commercial showcases the acres of forest at Center Parcs and shows how the forest is a fantastic playground for families.

Directed by Eric Lynne from Partizan and using the well-known children’s game of consequences, the TVC follows a family of four through the forest telling a story.  Starting as all good stories do with “once upon a time”, the imaginative tale builds between mum and dad, son and daughter each sharing different lines.  The characters from their imaginative story, including a robot and a forest whale amongst others magically spring to life around them as the story builds.

Colin Whaley, Sales and Marketing Director at Center Parcs commented, “Our research shows that in modern life, parents rarely get the chance to get on the same level as their children and give them undivided attention. This new campaign shows how through imaginative play and simply using the things around you such as the forest and nature, you can be together as family.  The  TVC builds on the approach of the previous campaign to focus on the emotional benefits of a Center Parcs break, rather than the actual product alone.

“We want to inspire people to carve out family time, not just during the festive period, but in daily life as well. So many of our guests come back time after time and tell us we are a great place to truly get together and enjoy being a family.”

Electric Theatre Collective collaborated with Hollywood concept artists who have worked on movies for the likes of Marvel to design the characters in the advertisement. The characters took over two months to develop, with painstaking detail to ensure they fitted naturally in the forest environment.  The piece took 1,200 hours of animation in addition to the time spent modelling and lighting each of the characters.