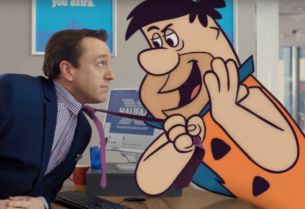 Halifax has today unveiled Fred Flintstone as the latest iconic character to feature in its new advert.

Created by adam&eveDBB, the ad tells the story of what happened when Fred Flintstone and his wife Wilma visit a Halifax branch in their search for a modern bank. Helped by colleagues, Fred is able to easily switch his current account to the Halifax and receive a £125 reward. He uses his reward to improve the performance of his car by buying some new trainers.

The ad launches on Tuesday 7th June. It will be shown during the breaks of popular programmes, including the first Euro 2016 match between France and Romania. Fred Flintstone will also feature in branch and online advertising, as well as social media to promote the £125 current account switching offer.

It was filmed at London’s Old Broad Street branch and features real Halifax colleagues as extras.

Russell Galley, Managing Director, Halifax said: “At Halifax, we pride ourselves on doing things a little differently. It doesn't matter who walks through the door, they will get a great welcome, great service and great products. The Flintstones will help us to showcase Halifax as a modern bank that makes banking simpler, easier and more rewarding for customers.”

Catherine Kehoe, Managing Director Group Brands and Marketing, Halifax, said: “Halifax has a rich heritage of marketing campaigns that aren’t like other banks, that stand out and get talked about. Our campaign is off to a flying start and I’m delighted that the next exciting instalment will see The Flintstones getting the famous ‘extra’ treatment.”