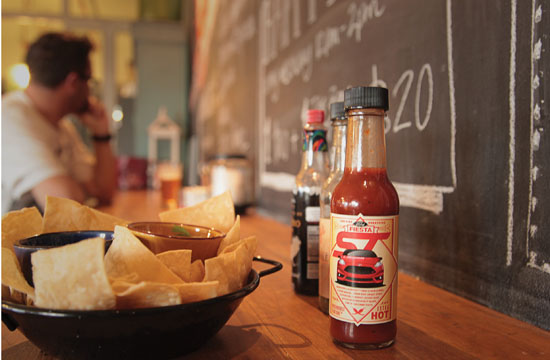 The Fiesta ST is a fire-breathing, ground-scorching, sports hatch that packs a whole lot of power into a small package.   When Ford launched the limited edition car in New Zealand last month,  JWT created ST Hot Sauce to connect with young consumers and generate excitement about the car in a really potent way.

To capture the sensory hit of the Fiesta ST in a bottle, JWT’S team worked with gourmet chilli sauce maker Chris Cullen to translate the power and strength of the vehicle into a flavour profile. The team tracked down the hottest chillis grown in New Zealand, making it eye-wateringly hot: 1.463 million scoville units. That’s hot.

JWT created a run of 3000 bottles of hot sauce with a unique recipe and colour that matched the Fiesta ST. In July, the sauce was then distributed around the top restaurants in Auckland, joining the condiments on offer on the tables. Specially constructed transit posters appeared in the vicinity of these restaurants, telling people to visit the Ford Facebook page for a chance to win a bottle for home, and other print executions supported this, featuring the stylized ST sauce bottle label that promoted the car. The agency simultaneously launched a promotion on the Ford NZ Facebook page, with a short video detailing the process and a simple giveaway competition with the sauce as a prize. 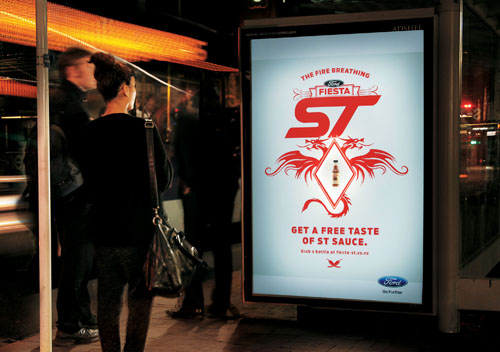 From the chefs at the restaurants to the people eating in them, the ST Sauce was a success and became a talking point both at mealtime and online. Better yet the launch of the Fiesta ST was a success, with two thirds of the limited edition vehicles available sold in the first two months.   The number of Ford’s Facebook fans jumped  5% in the first two weeks of the campaign.

"It's a print ad in a bottle, that you can taste – and a great conversation starter,” said Cleve Cameron, Exeutive Creative Director at JWT New Zealand.