The FA's ‘For All’ Campaign Gathers Momentum

Hero video created by VCCP, shows a group of girls performing a slick dance routine to demonstrate ‘there is more to football than football’ 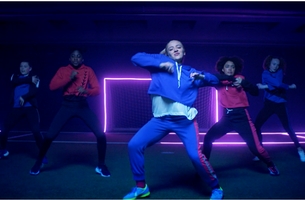 The ‘For All’ campaign, was launched in March 2017 and sits at the heart of The FA, championing the governing body’s provision and support of football for all people at all levels. The now established, ‘For All’ will focus on helping to achieve The FA’s strategic objectives.

Paid, owned and earned activity will be wrapped within the creative of ‘There is more to football than football’, which champions the togetherness, friendship and confidence that stems from playing the game.

The initial focus is upon The FA’s ‘Gameplan for Growth’ strategy which aims to double the player base and fans of women and girls’ football by 2020. The campaign targets 11 to 16 years old females and aims to inspire them to participate in the game, driving interest in initiatives such as FA Girls’ Football Week, SSE Wildcats and girls’ football clubs as well as promoting the fun and friendships that can be created from playing the game.

Activity is underpinned by a hero 30 second video created by VCCP and renowned Director Courtney Phillips, which shows a group of girls performing a slick, choreographed dance routine, later revealed as a goal celebration at a football match.

The video – available on thefa.com/forgirls – appeared in a primetime slot on ITV’s The X Factor on Saturday evening (18 November), supported by activity across Sky Adsmart .  Social versions of the video – fundamental to the target audience - have been created for use across key channels including; Snapchat, Instagram, and Facebook.  Media planning for the campaign was handled by Manning Gottlieb OMD.

The focus now is to help us inspire a change of behaviours - associated with our strategic objectives – bringing to life the wide ranging benefits that football offers. This is an exciting, dynamic campaign which we hope will inspire a new generation to have a long-lasting relationship with the game.”

Jim Thornton, Deputy Executive Creative Director at VCCP, “We want more girls to discover the joys of playing football. And most importantly, that playing football has never been just about the playing - it’s always been as much about the fun, about being part of a squad or a gang. That’s what we wanted to show in the ad - the camaraderie, the confidence & the craic that goes hand-in-hand with being part of a team.”

The campaign’s hashtag is #moretofootball and phase two will continue into 2018 with a focus on promoting The FA People’s Cup.

More information on ‘For All’ visit this link.