The Academy will oversee advertising, PR & social media ahead of major 2015 brand re-launch 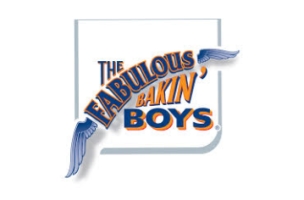 The Fabulous Bakin’ Boys, the UK’s No. 1 selling branded muffins, flapjacks and cupcake company, has generated excitement in the baking world by hiring The Academy to oversee its advertising, PR and social media ahead of its major 2015 brand re-launch, following a competitive pitch.

The company is expected to perform a major turnaround this year, following the recent engagement of key personnel with significant company turnaround experience, Chief Executive Richard Cooper and Marketing Controller Victoria Willis.  The duo was hired by the Dutch family-owned Daelmans Group to quickly transform the UK business with a plan of exciting, dramatically different initiatives, to shake up the bakery category.

The two are delighted to be working with Mitchell Kaye and Dan Glover’s agency that will consult on all aspects of brand communication for the Oxfordshire-based bakery, which celebrates its 18th birthday this year. The Academy’s remit includes advising on the in-house managed redesign, packaging and in-store presence, as well advertising, PR and social media. The new fresh product range and identity are expected to be announced soon.

Victoria Willis, Marketing Controller for Fabulous Bakin’ Boys, said: “This is the most important year for our brand and we are excited about pioneering a new, rather lovely and honest approach to bakery, which will be present across all aspects of the marketing mix. The Academy has been vital to the strategic and creative changes.”

“So far, consumer and trade feedback has been overwhelmingly positive, so we’re hoping that The Academy’s insightful communication work will complement the marvellous new bakery range and packaging. However, the real proof will be in the pudding (well, the muffin sales).”

Kaye, CEO and co-founder at The Academy, added: “We pride ourselves on doing work that gets noticed, solves a problem for our clients and passes into popular culture. That work has traditionally played out in PR and social media, but increasingly clients are asking us to develop our ideas into advertising campaigns that sit in a paid-for space.

“An idea that can play out across all marketing disciplines, but be genuinely newsworthy so the media want to cover it and people want to talk about it, is the Holy Grail for clients. And that’s exactly what we’re doing for Fabulous Bakin’ Boys.”