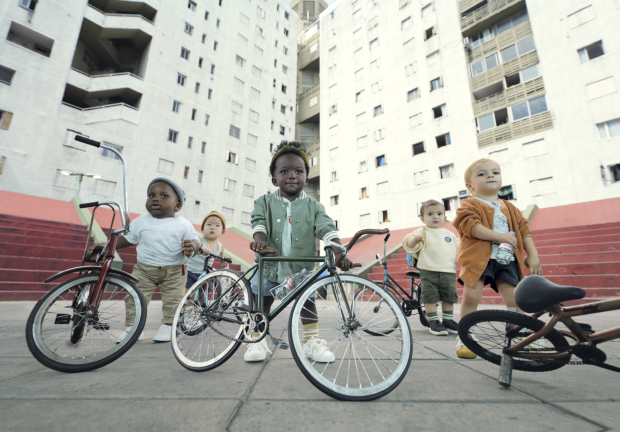 In an increasingly fast-paced world with ceaseless swiping and constant notifications, the campaign suggests we just need to trust that little voice inside all of us, that inner baby that reminds us that living well is about conscious living, focusing on the things that really matter.

At the heart of the global campaign is a commercial, created by BETC, that features the babies dancing, riding and singing their way through a hip-hop rendition of one of the great odes to a purposeful, natural life: The Bare Necessities from The Jungle Book.

The campaign marks a significant shift in tone, style and attitude for Evian, as the babies deliver a message. “We wanted to give the babies a voice,” said Evian global brand VP Patricia Oliva. “Because today living young is living with a sense of purpose, speaking up, advocating for a life that’s conscious and optimistic.”

Of the film, BETC founder and creative director Remi Babinet said: “We tried to capture all the wisdom and swagger of Baloo [the bear from the Jungle Book] in a way that still felt modern and celebratory.”

Directed by up-and-coming duo Vania & Muggia and produced by Iconoclast, the film features a cameo from former world #1 ranked tennis player Garbiñe Muguruza, and music from rising rap star Jay Prince, who is set to release a full-length version of the track, as well as a remix, both available on music streaming platforms.

These assets are accompanied by print, digital out of home and on-pack activations that feature three baby ‘gangs’. They embody the new 'Live young' ethos across three different mentalities: baby voguers, baby tennis players and baby bikers, all determined to live their life in a fresh and optimistic way.

It is the first time the natural mineral water brand has tied its 'Live young' campaign to its commitment to becoming a circular brand by 2025.

To highlight the importance of this message, the film depicts a baby recycling a bottle, a nod to the recent 'Flip It For Good' campaign launched by Evian' to increase consumer recycling rates in a fun yet impactful way.

The 45-second spot will air in France, UK, Switzerland, Belgium and Germany from the 12th of June and will see a slew of hip-hop merch-themed gear (records, shirts, etc.) launched on Instagram around the release of the new song available on Evian global website.