The 8-part C4/Netflix series, directed by Stink's Jonathan Entwistle is a darkly comic road trip tale based on the graphic novels by Charles Forsman 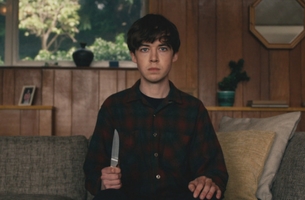 Imagine if David Lynch made a rom-com road trip movie about a pair of teen misfits in British surbubia, it would be Stink director, Jonathan Entwistle’s new British Netflix/C4 co-production (Clerkenwell Films) called The End of the F***ing World.  Breaking yesterday on C4 at 10.20pm and Netflix in January, it’s got cult hit written all over it.

The 8-part series is a darkly comic road trip tale based on the award-winning series of graphic novels by Charles Forsman.

It follows the story of a young teenager who thinks he’s a psychopath. At a time when he feels ready to move from killing animals to killing humans, he meets an equally angsty girl at school and thinks she might be the one. They ditch their families and escape the suburbs of London but things start to go wrong as their adventure leads them to real danger…

Blur's Graham Coxon has written his first major score for this and he, Entwistle and DOP Justin Brown have created an eerie audio visual landscape that takes the viewer into a dark, slightly surreal and amusing depiction of of British suburbia. The aim is to create the UK’s version of Americana, where Little Chefs become road-side diners and pine forests dot the skyline, while the melancholic 50s/60s soundtrack augmented by Coxon's score, conjures Essex Delta Blues.

The cast is led by Alex Lawther (Black Mirror, The Imitation Game) and Jessica Barden (The Lobster, Ellen, Penny Dreadful) as the two estranged teens who are trailed by two uniquely mismatched police detectives – played by BAFTA-winning Wunmi Mosaku (Damilola Our Loved Boy) and Gemma Whelan (Game of Thrones, The Moorside).