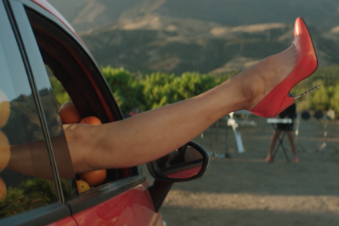 Wilson initially follows Chromeo musicians David "Dave 1" Macklovitch and Patrick "P-Thugg" Gemayel throughout the introduction, luring the audience as they begin their exploits with two mystery pairs of legs clad in orange high heels. Known for their ‘leg’ iconography from album covers to keyboard stands, the inclusion of heeled, silky-smooth women’s legs has been firmly connected with this electro-funk duo. 'Juice' sees Chromeo launch their new album 'Head Over Heels' by taking the ‘leg' aesthetic to new territory as Wilson reveals that those heeled legs belong to the band themselves! Waxed and heeled, Chromeo are back.

Notes Wilson: “Having had a long-standing love affair with imagery of men in heels, Chromeo’s new aesthetic made my heart sing. The key for me was embracing the heels look with the narrative of Dave and P travelling to find the perfect orange juice.”

Wilson adds: “We were able to capture this with a high-gloss, European glamour look created by cinematographer Simon Chaudoir: the perfect man for the job. It was quite the task to achieve this piece in one California day’s worth of sunlight, but we got there with a big dose of fabulousness.”

“Juice” joins director Wilson’s slate of noteworthy music video work, including David Guetta’s “Titanium,” Tame Impala’s “Mind Mischief,” Arcade Fire’s “We Exist” and Arctic Monkeys “Do I Wanna Know,” among others. His directorial achievements have been honoured with UK Music Video Awards, D&AD Pencils, an IMVDb MV of the Year recognition, and a Grammy nomination. Beyond his music video experience, he has also directed to branded content and commercials, for such clients as IKEA, Cadbury and Nike.