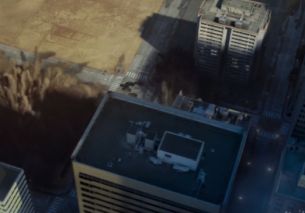 The juxtaposition of desert and city is what drives the latest campaign for Nissan in the Middle East. Directed by Nicholas Berglund's Nico Kreis, who already sports a Cannes YDA and numerous awards from various festivals around the world, this sport is vivid example that epic car commercials are back in style.

It doesn’t have to be a millennial manifesto anymore - just watch how the city emerges from the sand only to be taken away by the storm and be blown away by the power of the visuals.