The D&AD Awards Reveals its New Blood Class of 2014 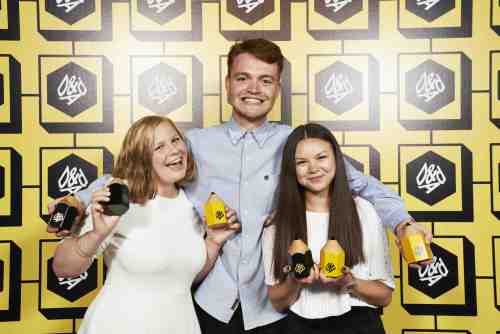 The judges described it as one of the most challenging sets of briefs to date, but the D&AD New Blood class of 2014 more than rose to the occasion in one of the most international editions of the awards ever.

The 2014 New Blood Awards encouraged young creatives to tackle ideas briefs with a multidisciplinary approach. Based around four topical themes (Open Culture, Urban Renaissance, Authenticity and Retail Revolutions), each brief challenged students to push the application of their own skills, whilst also seeking out collaboration in their responses.

In addition to a coveted D&AD Pencil, this year entrants also had a chance to win the ultimate prize for new talent: a place on the New Blood Academy, supported by WPP. All those who received a Nomination or higher at the Awards were eligible to apply for the two-week creative bootcamp, with the Academy providing an opportunity to work alongside a top WPP agency and secure an all-important foot-in-the-door with a series of paid three-month placements up for grabs also.

The first Black Pencil was awarded to the creative team of Paul J. De Ridder and Yme Gorter, tutored by Brian Williams and Susie Henry at Edinburgh Napier University. Their winning idea was ‘The Green Switch’, in response to the live WPP brief ‘Change habits, change the world’, set by former US Vice President Al Gore.

The Green Switch is a button on the Google website that alters the search algorithm by adding eco-labels to the equation. By turning on the switch, eco-friendly companies and products are rewarded with top search results in Google, forcing less eco-friendly companies to become greener to maintain a competitive online presence.

As the result of winning, the pair will now have the opportunity to present their ideas to Al Gore in person, at a special climate summit later this year. A second Black Pencil was awarded to Anna Barton, Louise Delves and Sam T Smith from Kingston University, who were tutored by Michael Bond. Their response to the XL Recordings brief ‘Illustrate label history’ was titled ‘Three’, an interactive poster for the concept album Aluminium, which is an orchestral reworking of the music of The White Stripes.

Three separate sections of the poster could be torn off and played through a punch-paper music box, either individually or together, creating a unique musical experience intrinsically linked to both the band and the event itself.

Sixteen brands took part in the 2014 New Blood Awards, setting a variety of multidisciplinary briefs. Galleries of all winners can be found below:

DCM – Show the emotion of film

MONOTYPE – Realise the importance of type

NATIONAL TRUST – Reconnect our relationship with nature and beauty

NOKIA – Revisit the idea of the decisive moment

NPOWER – Give control to energy users

RAB – Start an experience through radio

In total, the 2014 New Blood Awards received entries from 267 colleges hailing from 36 different countries around the globe, with more than 50% of colleges entering based outside of the UK.

Tim Lindsay, Chief Executive of D&AD commented, “New Blood is at the heart of what D&AD is all about. Our professional awards set the highest possible standards and select a body of work that provides a benchmark of excellence for the global creative community. But the New Blood programme is about the future of our industry - identifying, enabling, nurturing, guiding and inspiring the cream of the next generation of brilliant creative practitioners. It's where we are proud to spend the money we make from our other activities and is a programme we are committed to expanding in new markets over the coming years.”

Kati Russell, D&AD Senior Programme Manager commented, “This year we worked closely with Jo Jackson, MD of Protein and Iain Aitchison, Director of Plan to develop challenges that aren’t just relevant – but ones that creative directors are themselves genuinely excited about. We’ve had big name brands including ASOS, nPower and Sky and institutions such as the BBC and the National Trust setting briefs that reflect real-life challenges. What creative wouldn’t want to get their teeth into those?"

“The briefs were tough, but it’s made the process all the more rewarding. We’ve seen an incredible standard of work entered from all over the world and these young creatives have more than proven themselves ready to make the leap from education to industry.”