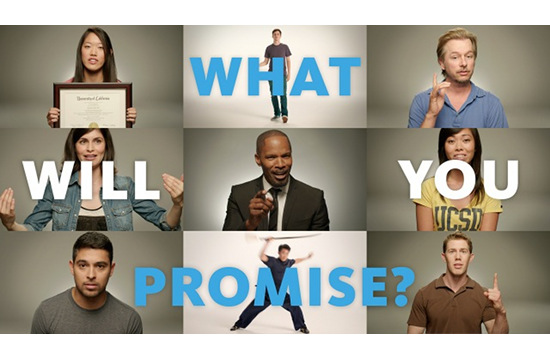 The University of California recently partnered with multidimensional storytelling company The D4D to create filmed content for Promise For Education, a six-week crowdfunding campaign that will bring together students, faculty, alumni, celebrities, influencers and supporters to raise money for UC student scholarships. Led by Founder/Creative Director Matt Checkowski, The D4D created the campaign’s launch film, Student “Why UC?” film, and a series of promise promos for use on the digital platform and seeded to social and digital channels, including Instagram.

Created in partnership with creative agency noise, Promise for Education is an innovative new way to increase private support for student scholarships and engage the community at large. The concept of Promise for Education is simple. Individuals make a personal promise – run a marathon, adopt a pet, volunteer, grow a beard – and set a crowdfunding goal ($50, $100, $1,000 or more). Then they share their promise through Facebook, email and other social media channels. Their friends are directed to PromiseforEducation.org, where donations can be made to see the promise fulfilled. All donations go directly to scholarships and grants for UC undergraduates with financial need.

The D4D’s Matt Checkowski and his team interviewed over 40 students and alumni to find the true story of about higher education and scholarships. These personal stories informed the campaign’s content, centered largely on unscripted documentary media. For the final material, The D4D interviewed comedians Jamie Foxx and David Spade, director Catherine Hardwicke, American rapper and spoken word poet George Watsky, as well as accomplished students, graduates and regents whose lives are enriched through the UC. These vignettes – touching, hilarious, wry and authentic – are an expression of personal passion, school spirit and the value of a world-class education all harnessed with the power of Promise for Education. View a selection at: http://bit.ly/16apEZw

This is the second collaboration between UC and The D4D. Last year, the company produced over 30 documentary shorts for the University of California’s Onward California brand campaign featuring luminaries in a variety of disciplines whose innovations and discoveries break new ground and impact the world around us. The D4D also provided social media and content strategy on the Onward campaign, which garnered significant earned media and directly and positively influenced the way Californians view the important role the UC plays in our lives.