Drive yourself around London with 'The Live Now DriveNow' campaign

Tonight sees the launch of DriveNow, a new spontaneous car sharing service from BMW Group and leasing company Sixt. The Live Now DriveNow campaign has been created by creative agency The Corner.

The DriveNow service, which already has over 350,000 customers globally across seven locations (Berlin, Munich, Dusseldorf, Cologne, Hamburg, Vienna and San Francisco) will launch across three London boroughs Islington, Hackney and Haringey from today with other boroughs set to launch the pioneering service in 2015.

“When a man is tired of London; he is tired of life” according to Samuel Johnson. The new DriveNow service allows Londoners to Live Now and make the most of the culture hot-spots throughout the city on a spontaneous whim. DriveNow is charged by the mile (39p) and uses a ‘drop anywhere’ service meaning that consumers now have more flexibility to park wherever they want - ANY legal on-street parking space, including all residential parking zones, allowing unparalleled parking access across some of the capital’s busiest creative, leisure and business centres. 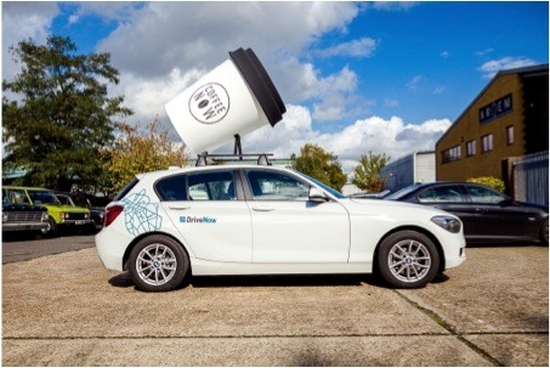 The launch event this evening takes place at M&C Motors in Dalston and sees lifestyle and music blogger Zoe London as DJ - crowd sourcing her playlist throughout the day. Vlogging during the day will be MTV’s Darren Kennedy in the lead up until the event and live on the night. Food has been taken care of by local foodie favourite Molly Bakes, as she plans to create a spectacular cake for attendees. Other locally sourced talent comes in the shape of Little White Lies, the online cinema resource which has created a map of movies which have been shot in the participating boroughs of Islington, Haringey and Hackney. Mums and Dads (MAD) will also be generating social content on launch day along with the other influencers to appeal to the diverse melting-pot, which is London town.

Raising awareness from today and until 14th December, will be a fleet of BMW minis driving through London carrying car-toppers (including a smashed guitar, aubergine and briefcase) highlighting the various leisure pursuits on offer throughout the capital which DriveNow allows you to take advantage of. To be in with a chance of winning 100 free minutes through DriveNow, simply take a photo of one of the seven different car-toppers and upload to Facebook as each day one lucky winner will be selected.

Joseph Seal-Driver, UK Head of DriveNow comments:  “Car sharing has really begun to capture London’s imagination. Londoners live life on the go, don’t plan ahead and live in the moment. DriveNow is the spontaneous car-sharing service they have been waiting for. The new Live Now DriveNow campaign that The Corner have created will give the category new cultural credibility.’ 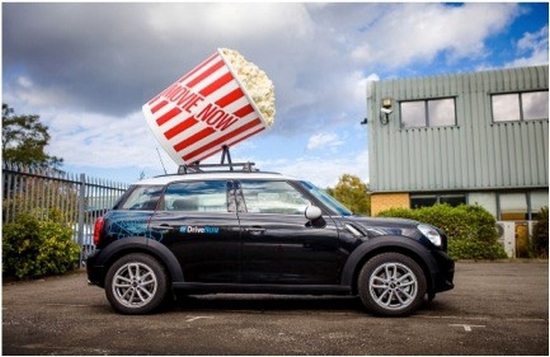 Neil Simpson, founding partner from The Corner said: “There have always been barriers to other car sharing services but DriveNow removes more than any I’ve previously seen. We’ve tried to build in elements of the freedom felt by customers into the campaign and branding we’ve put together for the team. The sharing economy just got its Hero product.”

A one-time registration fee of £29 gives DriveNow customers access to a fleet of 240 top of the range BMW 1 Series and MINIs. From Spring 2015 the fleet will also be London’s first electric car fleet with the arrival of 30 BMW i3s.

The DriveNow App (available on iOS and Android devices) is used by customers to locate and open their nearest car, or they simply use their customer card to unlock and activate a car they’ve seen on the street.