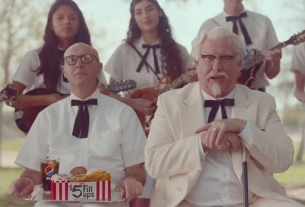 Seventy-five years ago a feisty 65-year-old chicken salesman (once a farmhand, an army mule-tender, a locomotive fireman, an aspiring lawyer, an insurance salesman, an amateur obstetrician, a political candidate and a ferryboat entrepreneur, among other professions) set out to give his neighbors the best fried chicken out there. A decade later that secret recipe and his finger lickin’ good® fried chicken made Colonel Sanders one of the most recognizable men in the world.

“Colonel Harland Sanders’ iconic legacy and world-famous Original Recipe® chicken are what set Kentucky Fried Chicken apart from the rest. His entrepreneurial spark and unrelenting appreciation for hard work, philanthropy and showmanship (or what he called “a little Colonel-ing”) are exemplary of the ‘American Dream,’” said Kevin Hochman, chief marketing officer for KFC US. “We want to remind today’s hardworking folks that his passion, dedication and famous secret blend of 11 herbs and spices are alive and well across our 4,300 restaurants in the US.”

In honor of this momentous anniversary, KFC is reintroducing the brand’s greatest asset—the Colonel himself—by bringing his down-home values and recipe for the world’s tastiest chicken to life via web, broadcast, social media and in-store experiences. You can view the all-new television spots below.