The Bill of Rights for Dumbasses 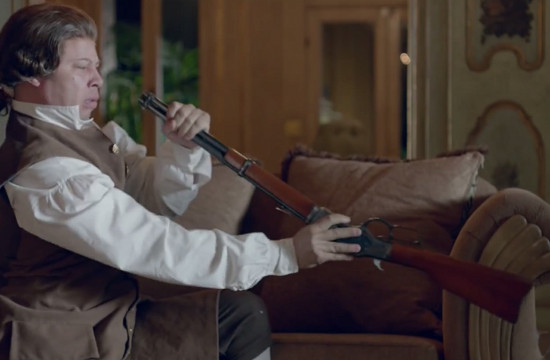 Evolve, the gun responsibility organisation, today launched its first ad campaign encouraging individuals to take personal responsibility for gun safety. Evolve aims to become the “third voice” in the American gun debate, a conversation that has been gridlocked for decades. Created pro bono by Saatchi & Saatchi New York, the creative work uses humour and satire to encourage responsible use and storage of guns.

"Safety is not a side.  Gun owners and non-gun owners live with guns in this country, and we should all be able to have a collaborative conversation about how to think about gun safety," says Rebecca Bond, Co-Founder of Evolve. "Humour can be a gateway to taking away the defensiveness that is the legacy of these discussions.  We hope to put this conversation on the kitchen table and start talking about it."

The campaign features a provocative short film directed by the highly acclaimed TV and film director Seth Gordon. It will appear in a number of places online, and portrays Thomas Jefferson and other political leaders and statesmen debating the language of the Second Amendment. After a heated debate, the group decides to remove a crucial “as long as you’re not a dumbass about it” caveat to the amendment. The video – based on the line “It’s the right to bear arms, not the right to be a dumbass” – highlights a number of outrageous examples of careless gun use.

“When we researched the gun debate in America, we saw that it’s become almost impossible to have a thoughtful discussion about gun safety,” said Claudine Cheever, Chief Strategy Officer at Saatchi & Saatchi New York. “What I love about Evolve is that they’re not about taking a side in that debate - they’re squarely focused on promoting personal decisions about gun safety. We believe the work will make people laugh and think.”

The call to action is for American gun owners to sign the Code of Gun Responsibility. For more info please visit http://www.takeonthecode.com/.