The Bigger Picture: The Animated Short That Bagged a Pair of Film Students an Oscar Nomination

Daisy Jacobs, Chris Hees and Chris Wilder on their ambitious life-sized animation that caught the eye of the Academy 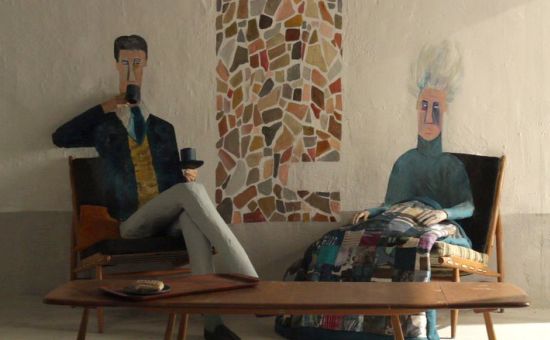 Eddie Redmayne was there. Emma Stone was there. Meryl Streep was there. And so was a crew of recently graduated British film students. Sunday saw the great and the good of Hollywood gather at the Dolby Theatre in Los Angeles for the 2015 Academy Awards, and among the hopefuls was the team behind The Bigger Picture, a touching animated film that brings together the 2D and 3D worlds. Daisy Jacobs directed the film while studying at the National Film and Television School (NFTS), with the help of fellow student Chris Hees, who produced it, and co-animator Christopher Wilder. With one very impressive accolade under their belt, Daisy and Chris Wilder have been raising money to get started on their next project. LBB’s Laura Swinton caught up with them to find out more,

LBB> You were both on course at the NFTS – but how did you end up partnering up and working together?

Just to clarify, there are two people named Chris involved with The Bigger Picture. Chris Hees, who produced the film and was a student at the NFTS, and Christopher Wilder, who was the film's co-animator but did not go to the NFTS. Chris Hees is not involved in the making of the new film as he is working on other projects, but Christopher Wilder IS making the new film alongside Daisy Jacobs. It's all rather confusing, but I thought I'd just be clear.

We met at Central Saint Martins School of Art and Design on the Graphic Design Course and were drawn to each other by our mutual lack of graphic design skills. We then both studied animation for a year on the St Martins postgraduate course, and again were terrified/amused by the lack of skill we seemed to possess.

We slaved side-by-side over animation desks, trying to make our illustrations move, encouraging, consoling and scolding each other. Daisy then went on to complete a Masters in Directing Animation at the NFTS where Christopher joined her to create The Bigger Picture. Daisy had been a painter from a young age and Christopher enjoys making things out of cereal boxes, so the idea of making a half painted, half paper maché animation seemed to fit our particular skill sets.

LBB> The film is certainly ambitious with its life-sized characters and props – why did you want to work on such a scale? And what was the reaction like from those around you (classmates, instructors, etc.) when they heard about the scale of your ambition?

At first a lot of people were very sceptical about what Daisy was planning to do. Some people were confused as to why the film wasn't being done using miniatures. But Daisy had been developing her life-size painting style for an entire year, gradually increasing its complexity. So the idea of suddenly making a film using miniatures seemed completely bizarre to her. We've now decided that if most people think your idea is wildly unachievable you're probably on to a good thing.

Absolutely. The interaction between the 2D and the 3D was something Daisy had been experimenting with on her previous film Rogue, which was a two-minute piece. In that film a painted character had picked up a real phone, and that idea grew and developed into the technique used in The Bigger Picture.

LBB> How long did it take you to prepare the space and design and build the props?

The props took roughly a month to prepare. We had to sit in a tiny office that had bars on the window making paper maché kettles, pineapples and arms. Many, many arms. That whole period was fairly grim.

Because there were so many different settings we had to alternate between animating and preparing sets on which to shoot, which often meant that you were exhausted before a scene's animation process had even started. There was one scene in the film in which the set just consisted of folded/draped clothing. This meant we had to spend about three days just gluing, which for some reason made us both furious.

LBB> I imagine it was time-consuming! Animation normally is, but in this case you were working on such a large scale! How long did the film take you to create?

From start to finish the film took about a year to complete. We spent six months animating solidly and, as there were only two of us, it just meant really knuckling down, keeping focused and ensuring we hit our daily deadlines. We were aware that if we slowly started to fall behind the entire project could derail. So we did what we needed to do to keep afloat, and if that meant sleeping on the floor of the office while Daisy giggled hysterically due to some sort of exhaustion reflex, that's what we did.

LBB> You're now trying to raise money for your next project and to get set up with equipment in your own studio – what are your hopes for that?

We really just need a space large enough for the six month period that the film will take to create. We use the term 'studio' very loosely. We're used to some pretty grotty environments so if we end up in a damp warehouse somewhere we'll be perfectly happy, as long as it's the right scale.

LBB> It's also pretty cool that after The Bigger Picture you're both still working together – how have you found your personalities complement each other? Why do you think you've made such a good team?

We spent almost every minute of every day together for six months solidly and in that time we saw every aspect of each other's personality. Even the parts that are vaguely terrifying. I think we both know that whatever happens during the process we are both entirely focused on making the work as good as possible. If we scream, cry or start hitting ourselves in the face (that only happened one time) we know it's fine, as long as we keep going.

LBB> So the film has been crazy successful on the award circuit and you were in the running for an Oscar... why do you think it's struck such a chord with people?

Well, we think the story is something that's very much present with everyone. Also the animation technique has never been done before and people are possibly drawn to something different, something they weren't expecting.