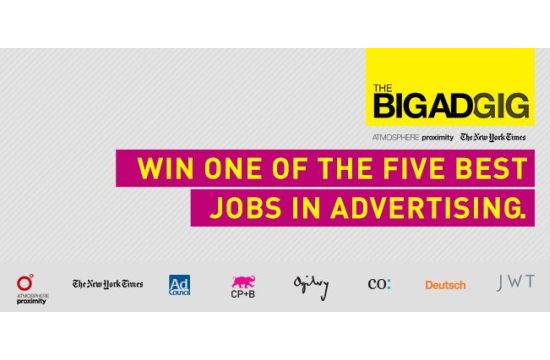 Atmosphere Proximity, in collaboration with The New York Times and CP+B, today announced its fifth annual Big Ad Gig (www.thebigadgig.com) competition, which offers eight young advertising creatives the chance to compete to win a 30-day paid internship at a top New York ad agency The competition will culminate with an event on Sept. 25, during  Advertising Week, at The New York Times Building, where six winners will be chosen.

Over the past four years, The Big Ad Gig has received numerous honors including W3s, Caples, Pixels and four Webby honorees.  In addition, twenty-eight of the past 32 Big Ad Gig contestants are working full time at leading agencies nationwide.

“Identifying great, young talent is a priority for all of us and is something that this program helps us all achieve. Nothing could be more relevant to aspiring creatives than challenging them to create a breakthrough campaign that puts social participation and mobile activation at the core,“ said Andreas Combuechen, Chairman and CEO, Atmosphere Proximity, the agency that developed the program in collaboration with The New York Times.

For the 5th annual Big Ad Gig, we enlisted the creative prowess of CP+B to play host to the contest and define its parameters. A video message from Chuck Porter, Chairman of CP+B, welcomes visitors to the Big Ad Gig website and explains the competition.

Like last year, candidates are required to submit a resume, portfolio and application to our panel of esteemed judges.

But, now, instead of having the applicants go away to create a video masterpiece, we want to them to do it immediately, right from their desks. Candidates will be asked one question for which they’ll have 60 minutes to record and upload a video response.

It's a chance to see how they handle the pressure that advertising so often brings, and how they think on their feet.

On September 10th, based on their “answer” and portfolio submissions, the judges will determine the 8 finalists who will compete at The Big Ad Gig in New York.

Selected finalists will be notified and invited to attend Advertising Week from September 23rd to 27th.

They will be given The Advertising Council’s creative brief that will serve as their final exam at The Big Ad Gig Live Event.

At the live event on September 25th, at The New York Times Building, each finalist will be given 4 minutes to present their solution to the Ad Council assignment in front of our panel of judges and a live audience.

At the end of the event, six finalists will be awarded 30–day paid Art Director or Copywriter positions at one of the participating agencies. One winning campaign will be produced and run on various advertising platforms including mobile, gaming and online.

To learn more, head to www.thebigadgig.com