Trends and Insight 431 Add to collection

In an age of division, some of the most celebrated brands in Cannes knew that they should believe in something, writes LBB’s Alex Reeves 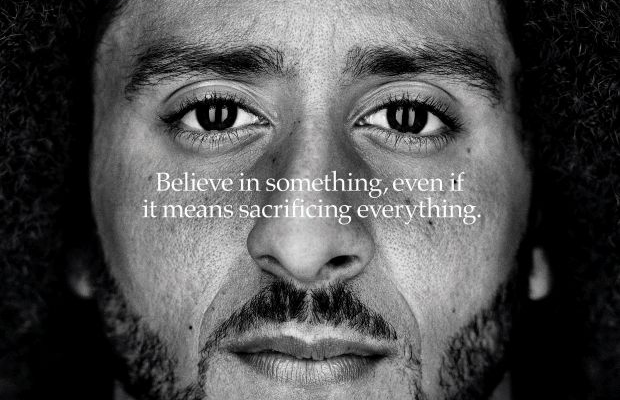 “It was elevated above everything. A single image. Once of the most iconic images in all of advertising,” says John Patroulis, chief creative officer of Grey Worldwide. He’s talking about the Nike billboard that set the world on fire (and quite a few pairs of shoes) in September last year. Wieden+Kennedy Portland worked with its client to put controversial ex-NFL star Colin Kaepernick’s face on a poster with the line, ‘believe in something, even if it means sacrificing everything’ and it made an impact on culture the world over. It ended up winning the Grand Prix at Cannes Lions last week in the Outdoor category, of which John was the president. “A static image. The impact it had on the world. The context that it stood in. It was just hard to talk about anything else having that impact as an outdoor piece and I can tell you there was incredible work.”
The Outdoor category is allowed to award two Grands Prix because it can be so difficult to try to compare, but the jury didn’t have to debate the Grand Prix. They all knew this was the one. “It got to a point where I was just like there is one thing. And it’s one category. So only one piece this year.”
But while the jury of liberal advertising types couldn’t fault it, ‘Dream Crazy’ was a piece of work that divided opinion. Much of Trump’s America was incited to action by it. People began burning their Nike shoes in protest against it.
The chasms opening up between communities around the world are gaping and the advertising industry knows it. With opinions becoming ever more polarised, ‘Dream Crazy’ became the ultimate case study in picking a side and wearing your brand’s raw, beating heart on its sleeve.
What Tyler Turnbull, group CEO, FCB New York, admires and learned from Nike’s work this year is: “That you have to have a purpose and a point of view. That POV may not be loved by every single person but the clarity of that can lead to attention that can be amazingly powerful for creativity and business. The days for a neutralised approach are fewer and fewer because there's no tension in the work.”
It’s an important piece of work, says Céline Mornet-Landa, creative director at Sid Lee Paris. She describes it as ‘tidying up’ their consumers: “‘You are Nike; you are not Nike’. You cannot please everyone. It’s important to choose and be strong in your convictions. It’s OK if it doesn’t fit with everyone. The planet is full of consumers. You will find people who love you.”
Alice Bottaro, creative director, antoni, was also on the Outdoor jury and took this lesson from the work she saw: “Brands need to be fine with the fact that they might say something and people might hate it but people will also love it.”
“Many brands are struggling with this,” says Danielle Hawley, CCO, Americas, POSSIBLE. In the United States they call it the doughnut because the middle of the country is so hard to reach and relate to. She agrees that brands need to have a view, but only “as long as it's intrinsic in their DNA.”
Nike may be in a league of its own according to her jury peers, but Alice adds that a lot of work awarded in the Outdoor category this year earned its metal by taking a stance on something. Domino’s ‘Paving for Pizza’ started fixing potholes where local authorities weren’t, ANZ Bank’s ‘Signs of Love’ united Australia’s LGBTQ+ community by bringing Mardi Gras to the small towns of the country and ‘The Hidden Flag’ for FELGTB snuck the Pride flag into the Russian World Cup through the medium of football shirts. All three won Gold. “Brands that showed some bravery and had opinions, but in a credible way,” says Alice. “We didn’t award the projects where the connection didn’t feel credible.”
Then there’s Gillette, who took a stand on what manhood should be in 2019, with a moving film about a transgender boy’s first shave. It took home a Silver and Bronze Lion.
The world is often presented to us now, thanks to the lack of nuance the internet often breeds, as two camps with extreme views on each side. Myles Lord, managing creative director at Serviceplan Berlin sees one of the biggest examples of this as: “There’s this concept of ‘the right’. Then you have the ‘millennial snowflakes’ that don’t believe [the right is] allowed to be. That is the antithesis of democracy. Not that I want the right to win. It is polarising. Either you’re a really bad person or you just don’t care. Brands have to find their place in that but they have to have a meaningful contribution.”
This is exactly the division that Karmarama’s ‘This is Belonging’ campaign for the British Army tapped into. They even wrote ‘Snowflake’ on a poster above a soldier’s head. It nearly doubled applications to join the Army and the Outdoor jury gave it a Bronze Lion. “That’s a polarising campaign,” says Alice. “It had very irreverent tonality for an army recruitment campaign. It mocked millennials in a loving way. I guess some people were pissed at it. But lots of people noticed it.” 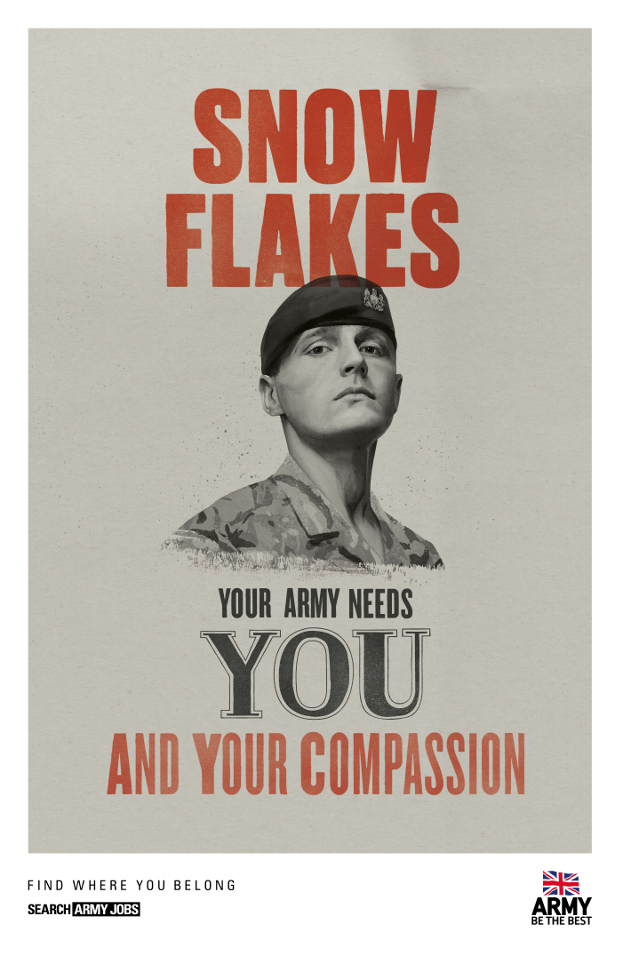 With Brexit, Trump, the rise of the far right from Brazil to various European countries, issues like gun control, abortion, LGBTQ+ rights, the world might seem to be violently disagreeing on all sorts of issues. But Tyler is optimistic about humanity and he thinks the right brands will show us this soon, to their advantage. “Divisions are played out in the media because they drive interest and views and clicks, and so there's a business model in polarisation in the media,” he says. “But when you go a level down into any place, there is more that unifies people than pulls them apart. Brands can think about the values that do unify and then drive a purpose on those, helping to bridge a bit of the divide.”
Universal human truths and emotions. That’s the key for brands that want to cross the divide, thinks Nicole Michels McDonagh, group creative director at POSSIBLE. “Everyone in the middle of the United States loves their kids as much as everyone on the coasts loves their kids,” she says. “Everyone experiences loss or challenge in some way. There's a universal truth that's at the heart of the best stories, so no matter where you're living, the divisiveness will make us as creatives work harder to find interesting, universal truths and emotions. And I think that will only benefit the work.”
view more - Trends and Insight