The Battle of the Bands

We have launched a new competition in London with Eclectic Music. The Battle of the Bands is now on and we have some great bands entered from DDB, AMVBBDO, Saatchi and Saatchi.... 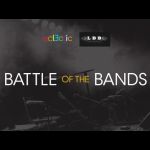 We have launched a new competition in London with  Eclectic Music. The Battle of the Bands is now on and we have some great bands entered from DDB, AMVBBDO, Saatchi and Saatchi, Waepon 7, Prime Focus and others. If your agency, post house or production copmany have a band and want to show your skills please read below as there is still space for a couple of bands to join us.

The facts: Years ago there was an inter-agency social event that was known as the “Battle of The Bands”. It was a very popular and successful competition which many agencies participated in. Well, we are resurrecting it. However this time it doesn't have to be just about bands. It could be DJs or a combination of DJs and live players........in fact, just about anything that produces sound.
This is a great way to have some fun and a real chance to showcase some of the raw talent within our industry. Our intention is to have a few "well-oiled" elimination evenings (mid to late May) culminating in a grand finale club night in London.

Quite simply: the best agency bands/DJs going against each other with a winner at the end of the night. The prize is even better. The winning act will be flown to Cannes and will perform at Eclectic’s beach party on the 25th June 2011 - a major event in this year’s Cannes Lions calendar.
We don’t want to make this too difficult to enter so the rules are very simple. Your band(s)/DJ collective must be made up of at least 50% agency staff. The rest of the act can be anyone you fancy.....or indeed anyone you can afford. We're adopting a policy of actively encouraging 'ringers'.
So if one of your colleagues happens to be friends with Damon Albarn, Dizzee Rascal, DJ Shadow or Eric Clapton, then bring them along.
Are you up for it? Or do you know of anyone in your agency that may be? Join this event here - http://www.facebook.com/event.php?eid=132643720140647 to find out more.
view more - Awards and Events