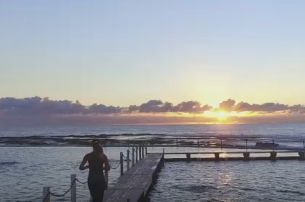 The Athlete’s Foot has launched its Love the Run campaign. This is the retail brand’s first collaboration with M&C Saatchi and Re:.

The strategic project launched in 2015 with the objective to be Australian runners clear, first choice for running shoes. Working with M&C Saatchi and media agency Initiative, the 2016 campaign is led by a 60 second video, which taps into the runner’s mindset and the brand’s understanding that every runner is different: each has a different running style, runs a different route and needs a different shoe.

No two runs are the same and The Athlete’s Foot celebrates all the types of everyday runs you get out of perfectly fitted running shoes - Love the Run and Love the Fit at The Athlete's Foot.

Caroline Squire, Head of Marketing said: “The Athlete’s Foot continues to evolve its running proposition in conjunction with our supportive brand partners - adidas, Saucony, Mizuno, Brooks, ASICS and New Balance. We’re excited to launch our 2016 Love the Run campaign with our agency partners M&C Saatchi and Initiative. At The Athlete’s Foot, we know every runner, and run, is different and we can fit every runner with the perfectly fitted pair of shoes and celebrate their run with them.”

Howard Spreadbury, M&C Saatchi’s Head of Retail said: “We’re really pleased with the Love the Run campaign and our first work with The Athlete’s Foot. We’ve created a campaign that heroes The Athlete’s Foot as running shoe experts and highlights the key products that they sell.

With the 60-second video appearing on The Athlete’s Foot owned media, the campaign launches broadly on 12 April.

Initiative’s Group Client Director, Robbie Aoukar, said: “Love the Run moves away from traditional media implementation in this category. This is a digital-led campaign with a native content focus, supported by TV and social channels.”

The campaign will also be supported by in-store POS, web films and digital assets.