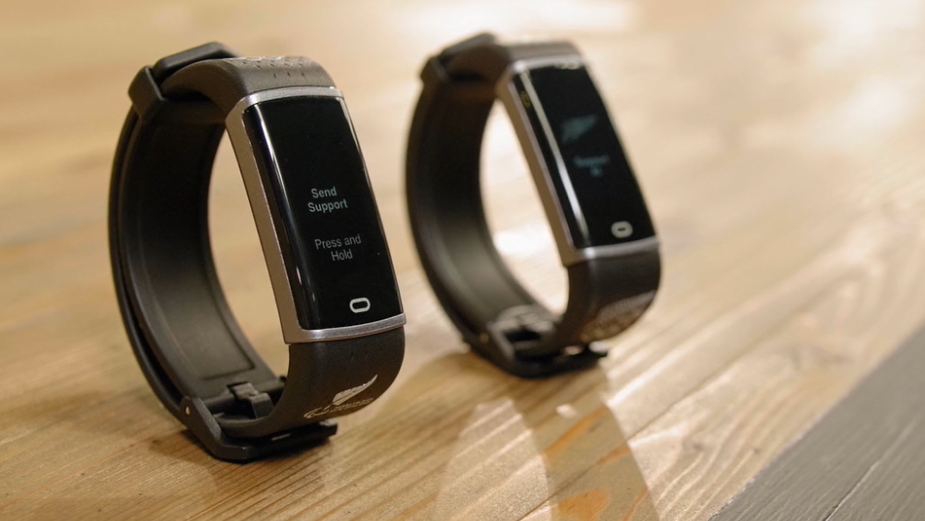 A clever wearable connecting Kiwi fans who can’t travel and developed for the New Zealand athletes at this year’s Olympic and Paralympic Games, is now being offered to games fans globally in a remarkable example of the Olympic spirit of friendship, solidarity and fair play.

Created by TBWA\NZ and called the ANZ Support Band, the wearable device uses Bluetooth technology in a world first that brings athletes and fans within touching distance despite closed borders, social distancing and athlete bubbles.

It's this lack of fan presence and the support they bring that has led to the decision by ANZ, with support from the New Zealand Olympic and Paralympic Teams, to open source the technology they’ve spent more than 18-months developing for the rest of the world to use.

The ANZ Support Band allows fans at home to send support to athletes in Tokyo by tapping their device or directly through the New Zealand Team app. A wearable innovation that bridges continents, athletes will receive the vibration of support via their own wristband.

“We’re all part of the global Olympic family and not having our friends and families with us will impact us all – whether we’re representing New Zealand or any one of the world’s 206 Olympic nations,” says Kereyn Smith, CEO and Secretary General of the NZ Olympic Team.

“Wherever they are from, athletes have worked incredibly hard to get to Tokyo and to be expected to perform without the physical presence of loved ones and fans will be tough, so we’re grateful to be able to provide a way for them to still feel the support they deserve.”

“That’s why ANZ decided to open up the technology for all to use. Right now, we and the world’s athletes need this more than ever.”

TBWA\NZ chief creative officer Shane Bradnick comments: “It’s well known the crucial role touch plays in our wellbeing. Whether support, respect or empathy, it’s something we’ve all missed and something we know our athletes will miss at this year’s Olympic and Paralympic Games. The ANZ Support Band aims to bridge that gap by showing our athletes that we’re thinking of them and supporting them through a tiny pulse on the wrist.

“ANZ, New Zealand Olympic Team, New Zealand Paralympic Team, Satellite Media, Gladeye and our TBWA teams have all done an incredible job in creating this technology to help connect our athletes with their fans. We’re thrilled to be able to open up this unique technology so other sports teams around the world can use it to feel the support of their fans.

“This is another example of Kiwis leading the way and showing thoughtfulness and generosity to the global community. In the mean time we can’t wait for the games and to make this available for Kiwis and athletes alike later in the year.”

Taking place in Tokyo, Japan, from 23 July 2021, this year’s highly anticipated Olympic and Paralympic Games will look very different. With COVID-19 limiting audiences and travel to an event that historically attracts thousands.

“In Tokyo, all national teams will be facing the same challenges and we know the difference the support from fans and loved ones can make,” says Antonia Watson, CEO of ANZ New Zealand.

“This is why we wanted to make sure athletes wherever they are from could still receive that support and fans could show their teams they are right behind them even though they may not be there physically. This is why we’re opening up the technology behind the ANZ Support Band.”

“While we are very excited about what the ANZ Support Band can do for the NZ Paralympic team, the NZ Olympic team, and Kiwi fans, we’re also very aware of this wider need to connect fans and athletes around the world. As New Zealanders we’d be proud to share this technology to help.”

Fiona Allan, chief executive and secretary general of Paralympics New Zealand, believes the sharing of the technology helps encompass the values of the Paralympics.

“The Paralympics are all about athletes and teams coming together to showcase courage, determination, inspiration and equality and in doing so, drive social inclusion. The sharing of this technology so athletes across the world can now feel the support of their fans back home epitomises the Paralympic spirit and the core values of inspiration and inclusion,” says Allan.

The technology has been closely developed with the input from a number of current Olympians and Paralympian’s.

This includes sprint cyclist and Rio Silver medalist Sam Webster, competing in his second games he is already anticipating just how different the atmosphere at this year’s Olympics will be.

“As an athlete, you thrive off the energy a crowd can bring. Without that support its tough, I love the fact we are giving away this incredible technology so my fellow athletes from around the globe have the chance to feel their fans' support too” says Sam.

Echoing this sentiment, Paralympian Jesse Reynolds says the support band has added an element of excitement to the upcoming games.

“While I won’t be getting a physical high-five from fans, this technology will make me feel closer to home. I can’t wait to get in the pool and do New Zealand proud.”

Olympic Associations around the world are encouraged to get in touch as soon as they can to get the technology underway and ensure their athletes can be supported from afar.