Trends and Insight 314 Add to collection 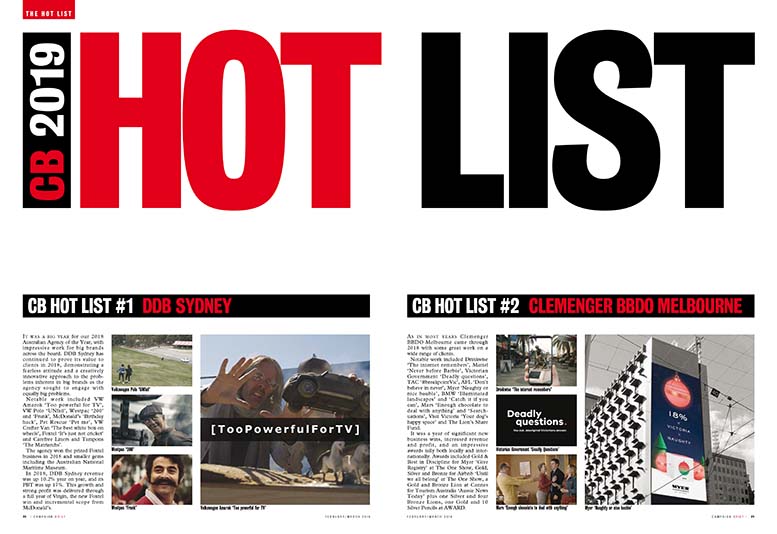 There were several agencies that gave DDB Sydney a run for its money in the final shortlist for Campaign Brief Agency of the Year. Here are 10 that made the Campaign Brief Hot List, and 30 more that had moments of glory during 2018 that deserves recognition...

CB HOT LIST #1
DDB SYDNEY
It was a big year for our 2018 Australian Agency of the Year, with impressive work for big brands across the board. DDB Sydney has continued to prove its value to clients in 2018, demonstrating a fearless attitude and a creatively innovative approach to the problems inherent in big brands as the agency sought to engage with equally big problems.
Notable work included VW Amarok 'Too powerful for TV', VW Polo 'UNfail', Westpac '200' and 'Frank', McDonald's 'Birthday hack', Pet Rescue 'Pet me', VW Crafter Van 'The best white box on wheels', Foxtel 'It's just not cricket' and Carefree Liners and Tampons 'The Matriarchs'.
The agency won the prized Foxtel business in 2018 and smaller gems including the Australian National Maritime Museum.
In 2018, DDB Sydney revenue was up 10.2% year on year, and its PBT was up 17%. This growth and strong profit was delivered through a full year of Virgin, the new Foxtel win and incremental scope from McDonald's.
CB HOT LIST #2
CLEMENGER BBDO MELBOURNE
As in most years Clemenger BBDO Melbourne came through 2018 with some great work on a wide range of clients.
Notable work included Drinkwise 'The internet remembers', Mattel 'Never before Barbie', Victorian Government 'Deadly questions', TAC '#breakpointVic', AFL 'Don't believe in never', Myer 'Naughty or nice bauble', BMW 'Illuminated landscapes' and 'Catch it if you can', Mars 'Enough chocolate to deal with anything' and 'Search-uations', Visit Victoria 'Your dog's happy space' and The Lion's Share Fund.
It was a year of significant new business wins, increased revenue and profit, and an impressive awards tally both locally and internationally. Awards included Gold & Best in Discipline for Myer 'Give Registry' at The One Show, Gold, Silver and Bronze for Airbnb 'Until we all belong' at The One Show, plus one Silver and four Bronze Lions, one Gold and 10 Silver Pencils at AWARD.
CB HOT LIST #3
VMLY&R MELBOURNE
VMLY&R Melbourne put in a solid creative performance in 2018 with a few campaign that were truly world-class and bound to do well in the award shows this year.
Notable work included Monash University 'Sip Safe Wristband', Public Transport Victoria 'Explore the night', 'Longest ever encore' and 'The silent radio ad', Monash University 'Study scents', 'Change it' and 'A different lens'.
The agency had seven different campaigns awarded in 2018, including a Gold Lion plus Silver and two Bronze for Sip Safe, which also won the Health Grand Prix a Spikes plus Silver and Bronze, four Gold, three Silver and two Bronze at Adstars, as well as Gold at LIA, Silver at Clio,  and a coveted LBB Immortals Award.
As owners of the intellectual property, VMLY&R is investing in Sip Safe by partnering with festivals and venues all over the world to prevent drink spiking.
The agency scored new clients in 2018 ~ Australian Unity, Alfa Romeo and Pop In ~ with no losses.
CB HOT LIST #4
CHE PROXIMITY SYDNEY
CHE Proximity Sydney continued producing some great work in 2018, after bursting into creative contention the year before.
Notable work included Velocity Frequent Flyer '#earnbassadors', Cochlear 'Hearprint', NRMA Insurance 'Safety hub app' and E-Bay Plus 'Free delivery'.
'#earnbassadors' was a standout campaign, sure to do well in the award shows this year. The agency converted Velocity's marketing budget into points to turn irrational behaviour into total hysteria. An AI chat bot called 'Earnie' was built, who found Earnbassadors, gauged the sentiment of their content, ranked them, and rewarded them accordingly. 'Earnie' then suggested which user-generated content to turn into ads, which demographic would be the most effective to target, and put paid media behind the post to reach them.
Cochlear 'Hearprint' is software created to calibrate every video, TV show and audio track on the internet to your unique hearing. The software tracks changes in hearing ability over time.
CB HOT LIST #5
THE MONKEYS SYDNEY
The Monkeys, sydney put in a solid creative performance in 2018, with great work across a wide range of clients.
Notable work included Berlei 'Boob Balls', UNICEF 'Give a minute of your time', Jim Beam 'I'm Eugene', MLA 'Lamb Side Story', University of Sydney 'Postgrad', U Bank 'Doll house', CGU 'Australian as it gets' and NRMA Insurance 'Don't drive naughty, drive nice'.
The Monkeys scooped up awards in 2018 including Webby Awards, APAC Effies, Clio and AWARD.
It was a good year for new business, including further projects in the IAG master-brand stable, Krispy Kreme and UNICEF.
The much talked about acquisition of the agency by Accenture Interactive is driving The Monkeys into the future in ways they only imagined. Part creative agency, par business consultancy, part technology company.
Their work in 2018 has once again been talked about, debated and awarded, but certainly has not been ignored.

CB HOT LIST #6
TBWA SYDNEY
It was another strong year for TBWA Sydney with some top work noted for high production values.
Notable work included Apple 'First Dance' Woolmark 'Live and breathe', Pepsi Max, Zyrtec 'High fashion high pollen dress', Skyy Vodka 'YYES' and Hungry Jacks 'Pineapple Whopper meme'.
Awards in 2018 included two Silver and two Bronze at Clio, one Gold and two Bronze at the Effies, six Gold at Adfest, Gold at the World Luxury Awards, plus one Silver Pencil and five Bronze Pencils at AWARD.
The agency added several new clients in 2018 including Woolmark global, Pepsico, Sheridan, Macquarie University and QuickBooks. They said goodbye to David Jones and Foxtel in order to take on the giant Amazon business.
In March 2018 TBWA Sydney launched the Amazon Marketing Consultancy (by Integer), a specialist strategic and content creation unit to partner with Australian brands to maximise the opportunities offered by the launch of Amazon into Australia.
CB HOT LIST #7
CUMMINS & PARTNERS MELBOURNE
Cummins & partners, melbourne was a major improver in 2018, with several campaigns destined to pick up metal in 2019.
Notable work included Specsavers 'Vesper Sacs - priceless eyes' and Specsavers 'The error-ridden ad', ASIS 'The most interesting job interview', the MADC 'Meet Grant' parody, Red Cross '42' and Movember Foundation 'Man of more words'.
The agency won a Silver Lion at Cannes for ASIS 'The most interesting job interview'. In September 2018 the agency's work for Movember, Specsavers and MADC won Bestads Best of the Week three weeks running.
For Specsavers the agency filmed the reaction of real people when offered extraordinary amounts of money to sell their eyes. To make the offer believable, the agency created Vesper Sacs, a fake medical research company, constructing an immersive sci-fi inspired facility, complete with staff. Confronted by the prospect of a life without vision, subjects realised they should look after their eyes.

CB HOT LIST #9
J WALTER THOMPSON SYDNEY
J Walter Thompson Sydney put in a good showing in 2018.
Notable work included Berlei 'I touch myself' with Serena Williams, Rural Fire Service 'How fireproof is your plan?', Sydney Cats & Dogs 'Doggy dates', Subway 'Live feed', Regaine 'Regaine your hair', and Rare Cancers Australia 'Cancer is Cancer'.
The standout campaign of the year was Berlei 'I touch myself', featuring Serena Williams. This follow-up to the 2014 campaign touched over a billion people across 95 countries during Breast Cancer Awareness Month. Despite it being out of her comfort zone, one of the world's greatest influencers agreed to front the campaign. With an influence score of 98% it meant that when Serena Williams sang, people listened. By lending her voice to the project, Serena has become a champion for women's health, and put the importance of early detection on the global stage.
New business wins included Smartraveller, Berlei, Rural Fire Service and Western Power, Solaris Paper, Bravecto and IHG.

CB HOT LIST #10
SPECIAL GROUP SYDNEY
Small can be dangerous and Special Group, Sydney certainly were to some of the bigger agencies in 2018.
Notable work included Uber 'See you soon', Uber Eats and Uber 'Realtime pick up posters', Red Bull 'Uphill marathon', Tipsy app and Harris Farm store design.
The agency added six new clients to the roster in 2018, four without even pitching. Special was put on the CUB roster and even took on projects from their overseas owner Anheuser Busch. The agency internally grew the already massive Uber Rider, Driver and Uber Eats businesses, and designed and helped open six Harris Farm supermakets. Special entered into an entirely new business partnership with Nakatomi technologies with the launch of Tipsy. Special pitched Tourism New Zealand with a huge global idea (launching in 2019), taking the business away from TBWA.
CB HOT LIST
AGENCY MOVERS & SHAKERS
(in alphabetical order)

R/GA, SYDNEY
4 Star Work: NRL 'This is how we League', Toyota 'Digital', Telstra 'The numbers game', NRL 'Out for blood'.