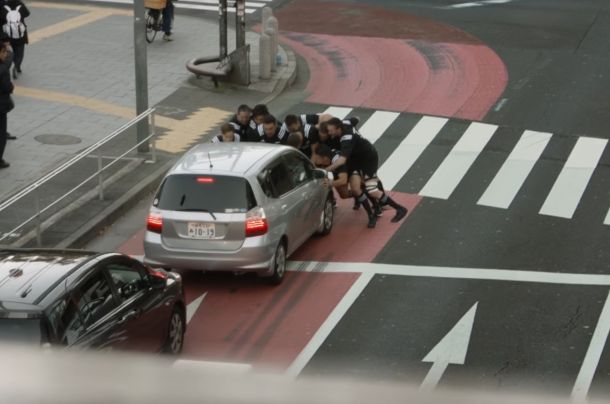 Following the launch of their ‘Active Care’ insurance last year, AIG Japan has created an online film to promote the new concept that sideswipes all of the old conventions of the local insurance industry. Within three days of the launch, the film exceeded 10 million organic views online across Facebook, YouTube and Twitter.

As part of all standard AIG Japan insurance coverage, the company actively cares for customers before, during and after all of life’s major milestones. Active Care is as much about trying to prevent bad things from happening as it is about dealing with the consequences of adverse events.

The film created by TBWA\HAKUHODO named #TackleTheRisk, features New Zealand’s National Rugby Team storming the streets of Tokyo, and tackling stunned citizens all over the city.

We then realise that the flying tackles are not random, but that each one is actually a life-saving act, rescuing someone from a terrible unforeseen accident.

The movie illustrates in a humorous and light-hearted way how there can be risks lurking in unexpected places throughout our lives. Most of us don’t have guardian angels flying at us in the form of burly rugby players - but the movie shows AIG will be there to proactively help prevent terrible things from happening with Active Care.

Matthew Walker, SVP and Regional Chief Marketing Officer at AIG Japan Holdings, said, “At AIG Japan we are setting out to reinvent insurance in Japan – a category that we know to be ripe for disruption. Our value proposition, 'Active Care', is about creating a proactive rather than reactive customer experience. Kazoo and the TBWA\HAKUHODO gang delivered perfectly with the #TackleTheRisk strategy. It was an arresting way to show our fantastic relationship with the All Blacks, demonstrate the idea of risk prevention, and create a strong connection to the Japanese audience."

Kazoo Sato, Chief Creative Officer of TBWA\HAKUHODO, explained, “We searched for the perfect way to bring the idea of AIG’s proposition to life. With Japan hosting the Rugby World Cup in 2019, interest in the sport has surged, presenting a great opportunity to resonate with the public through collaboration with the All Blacks. An inventive way of demonstrating the brand’s message in the ‘land of the rising scrum’.”

Todd Barberel, Head of Marketing, Brand & Commercial Development at New Zealand Rugby also shared his excitement: “We’re very honoured to be part of this film and to be supporting AIG with its #TackleTheRisk campaign featuring the All Blacks. We enjoy a lot of support from Japanese fans and hope that this campaign will also help to increase interest in our team ahead of Rugby World Cup 2019. The players enjoyed filming the campaign and experiencing the sites and culture of Tokyo, and are looking forward to the next time they visit.”