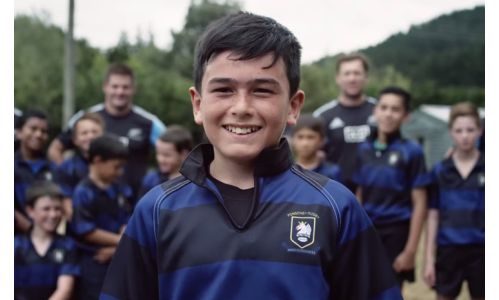 It was like something out of the dreams of Kiwi boys everywhere, but for 10-year-old Auckland boy Bailey Paki waking up to find a group of All Blacks at his breakfast table became a reality, thanks to Weet-Bix and New Zealand Rugby.

In the hidden camera clip, rugby-mad Bailey is stunned to wake up and find All Blacks captain Richie McCaw and his All Blacks teammates Ben Franks, Wyatt Crockett, Tom Taylor and Frank Halai eating Weet-Bix at his breakfast table. His heroes then take him into the backyard, which has been secretly transformed into a rugby pitch overnight by Bailey’s grandfather and their local community for Bailey to play in a surprise match against the All Blacks.

While many New Zealand boys dream of one day playing for the All Blacks, this talented young man has already mapped out his ascension to World Cup fame with the All Blacks in a highly detailed 16-year plan. To date, he is on track to achieving his dreams.

The campaign was created by Saatchi & Saatchi for Sanitarium and Weet-Bix. Saatchi & Saatchi New Zealand’s Executive Creative Director, Antonio Navas said: ”The experience of bringing Bailey’s dream day to life has been an incredible journey for everyone involved. I think we have all been a little inspired by his passion and determination along the way. Creatively, the opportunity to bring together two of New Zealand’s most iconic and loved brands together in this way was our very own dream day.”

“We know thousands of Kiwi kids dream of becoming an All Black, so it’s fantastic to see one great kid’s dream come alive in this touching moment. We were really happy to play our part in capturing, in this clever way, the extraordinary appeal of the All Blacks, so thanks Sanitarium.”

Pierre van Heerden, General Manager of Sanitarium Health and Wellbeing New Zealand was thrilled they could make a dream come true for such a deserving young boy.

“While Kiwi kids are Weet-Bix kids, they’re also rugby mad, so it’s fitting that we could make Bailey’s dream day happen. Weet-Bix has a long-standing relationship with New Zealand Rugby and is The Official Breakfast of the All Blacks so it’s fantastic we can work together to make dreams come true.”