The ADC of Europe Announces The European Creativity Festival 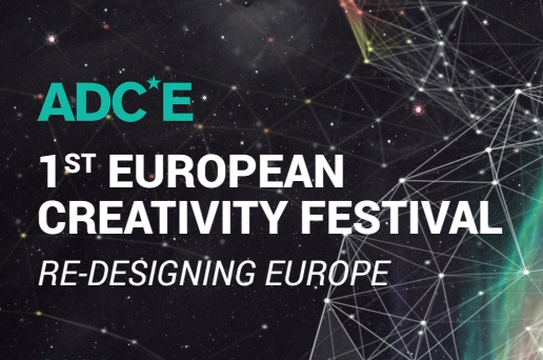 The top professionals in creativity, innovation and European design will gather at the Disseny Hub Barcelona to show, in the first edition of the European Creativity Festival how creativity can change and is, in fact, already changing the world.

Three days –6, 7 and 8 November– of conferences, workshops, awards and networking spaces in which the Art Directors Club of Europe, promoters of the event, aim to annually bring together the best and most influential European professionals in the field to celebrate and recognize the art of creativity, graphic design and new creative solutions.

In this first edition of the Festival, some of the guests include: Amir Kassaei, Executive Creative Director worldwide for DDB advertising agency, one of the most awarded creatives in the world –over 8.000 national and international awards-, Guido Heffels, Executive Creative Director for German agency HEIMAT and one of the most prestigious advertising professionals in the country, Italian designer Louise Fili, renowned for her work in brand identity in the food and restaurant industries. The Festival will also feature talks from Felipe San Juan, Director of Google’s Creative Agencies and Catherine Flood, curator of “Disobedient Objects” at the Victoria&Albert Museum, an exhibit on design Works examining the powerful role of objects in movements for social change. From Spain, creative talents Astrid Stavro -Design by Atlas- and Albert Folch –Folch Studio- will also share their experiences.

The main proposal in this first edition is Re-Designing Europe. In a more complex and changing world, a more creative approach is necessary to address global issues. It is under this premise that renowned professionals and creative teams will meet at the Festival to show how the use of creativity can lead to change, not only in the communication industry but in the way people relate, how they manifest and how they approach business.

I wish I’d Done That

Curated by renowned British creative club D&AD, and based on their ongoing communication campaign, recognized creative Europeans will be asked which work from the design and advertising industry made them unbelievably jealous. Each speaker –Astrid Stavro, Gary Holz and Andy Sandoz- will show the work, and will tell the audience why they wish they'd done it; thereby explaining their approach to both ideas and creativity.

Highlights from Europe, powered by PechaKucha

Using the successful Japanese format of PechaKucha, in which speakers share their creative ideas through 20 images each in 20 seconds, a selection of celebrated professionals from the European creative industry –designers, artists, advertising creatives, thinkers, activists, etc.- have been invited to share their ideas with the audience.

Festival participants will have the opportunity to take part, on Saturday morning, in one of the five workshops programmed for the event. Learn By Funding with Goteo will show different formats of crowd funding. Co-Creation with Platoniq will explore the various possibilities of developing projects for social good. The body point of view with Javier Tolja and Patrizia Boglione will focus on how, whether consciously or subconsciously, each design decision affects us physically. Data visualization with Outliers presents a multidisciplinary introduction to data visualization where participants will learn to tell a story with data. And, Music to Watch with Trafalgar 13 where creative processes associated with musical composition will be explored using real-life study cases.

The Art Directors Club of Europe (ADC*E) celebrates this year, in the frame of the European Creativity Festival, la 23rd edition of the Best of European Design and Advertising - ADCE Awards with the participation of over 600 creative Works. The Best of European Design and Advertising ADC*E Awards is the only international competition he only international competition to gather awarded works from the most prestigious national European competitions. The distinctions awarded by the ADC*E are the top recognition any Gold, Silver, Bronze or Shortlist locally awarded work can aspire to in a continental scale.

A prestigious international jury composed of 47 renowned creatives from 15 European countries will gather in Barcelona on Thursday, 6 November, to vote this year’s winners who will be announced on Saturday, 8 November. The Grand Prix will be announced Saturday night, during the Festival’s closing celebration.