The 5 Things at SXSW That Converted Me Into a Fan

It was GSD&M Strategist and actual Austinite, Colin Hoover’s first ever SXSW. And it totally changed his opinion… 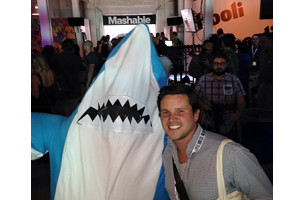 This was my first SXSW experience. That’s a little weird because I’m from Austin. Then again maybe not so weird because after growing up here,  I associated the tradition with traffic, long lines at brunch, loud noises, and live music – all things I hate (I know, I’m a cranky old man, get off my lawn).  But this year, I manned up and took on SXSW Interactive like it was my job (it was my job), and you know what - it totally changed my mind.

Here are the 5 most important things that made me believe in the power of SXSW.

1. We are all just Golden Retrievers eating hot dogs.

The notion that you could realistically create a schedule and then strictly adhere to it is completely absurd, but SXSW is still trying. I went into the festival with a clear plan, but I wasn’t there more than 15 minutes before I was waylaid from my itinerary by an impromptu start-up pitch, then there was a branded flash mob, an Indo-Korean BBQ street taco at some point, and then I wandered into a pop-up circumcision protest (or foreskin rally, depending on your perspective). I think I ended up going to four of my planned events. The rest was just a free sample-fueled technocratic orgy of innovation, ideas, and culture. There was too much to do, too much to see, and too little time to make it all happen. In the end, I couldn’t help but feeling a little like that Golden Retriever who eats all the hot dogs – distracted, but pretty happy

2. You can learn a lot about innovation from ketchup.

You learn quickly that not all that sounds cool is cool. Some stuff that sounds cool like “How Music Makes the Movie” is literally just some dude showing a room full of people clips of his favorite parts in Old School. But sometimes when you leave said session (after swiping your ass across 25 strangers’ faces in a particularly unceremonious exit), you wind up in a new session with Daniel Jurafsky on the history of ketchup, which was the perfect respite.

Dan described the little known and highly scandalous history of the American staple, which is actually not so American after all. It came to us from England, and to them from China, where it was originally a fish sauce called kôechiap or kê-tsiap in Hokkien Chinese. Dan used this history to articulate the idea of innovation through constraints. Sailors used it because they needed something that wouldn’t spoil, but added ingredients to accommodate a more European palate. Different cultures added their own nuances to accommodate their tastes and needs and through a very long, iterative process, we have one of the most delicious, most versatile cheeseburger accoutrement in the history of food.

Now I know that Grumpy Cat is still a big deal. I waited in line to get my picture taken with him, but it was insane! By the time I got to my next session, I was way too late and had to do the butt-in-the-face thing again. Never again, Grumpy Cat. Never again.

4. Technology is getting a little touchy-feely.

One of my colleagues pointed out to me, and I think she’s spot-on, that empathy was a major theme in a lot of the sessions. I understand this for brands and advertisers, but what really struck me was the amount of entrepreneurs, developers, and venture capitalists talking about the role of empathy and human understanding that goes into the creation of effective technology. Google X’s Astro Teller said that understanding human behavior is absolutely critical to effective design. He noted that one of their key assumptions when building Google’s self-driving car was that a human being would be an effective back-up driver if the system failed, which was a terribly flawed assumption. “You wouldn’t believe the kinds of things people do when they’re driving,” he said, “Imagine the kinds of things they do when they think the car’s got it all under control.”[1]

There was a large focus this year on really understanding people and all their weird little quirks, as well as the deeper level emotions that govern that weird behavior. As one judge at the pitch competition put it, “You have to just go buy someone a beer and ask them to use your app. What people say they do, and what people actually do are two entirely different things. If you want to understand just how viable your product is, you have to actually watch people use it. You’ll be blown away by the kinds of weird shit you’ll see.”

5. Southby is good for Austin.

Austinites have a complicated relationship with SXSW. In a way, it is a microcosm for all the changes that Austin has undergone over the last 20 years. Which is a sore spot for many of us. There is a sense of pride that comes with having your city on everyone’s radar, but there is also a sense of having your home warped and distorted in a way that is totally out of your control, and in many ways exclusive of you. But while the growing pains are very real, the change is for the better.

The people I met with this weekend — those who I spoke with over coffee, talked to between sessions and met with over beers, were some of the smartest, most interesting, and passionate people I’ve encountered. The people who come to SXSW are representative of the people who are moving to Austin every day. They aren’t the superficial L.A. socialites or the wealthy New York financiers we all suspect. They’re down-to-earth, genuine people who want to come to a place that fosters their passions, their creativity, and their entrepreneurial ambition, and I’m happy to say that many of them have found a home in Austin.

Colin Hoover is a Strategist at GSD&M