Awards and Events 570 Add to collection 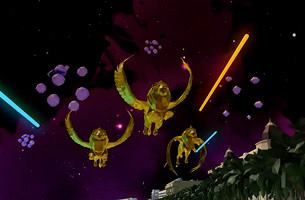 The beginning and the end of the Cannes Lions is always marked by two big shindigs on la plage: the opening and closing galas. To accompany the tunes, drinks and dancing is always a series of eclectic visuals tied to the Cannes Lions, and for 2015 the job of developing them fell to S8 Companies, a Toronto-based collective that represents companies that specialise in production, post, music and experiential. S8 were enlisted again for 2016 and were presented by the festival with a very to-the-point brief: ‘Thank You Creativity’. The result is a series of 25 films (of which you can grab a sneak peak of below) that delve deep into the minds of some of the world’s most famed creatives, including Leo Burnett global CCO Mark Tutssel, Droga5 founder David Droga and Leo Burnett Canada CEO and CCO Judy John.

LBB’s Addison Capper chatted with the CEO of S8 Companies Rodney Davis and Smith’s creative director Gary Thomas to find out more about this year’s campaign.

LBB> What was the brief like that you initially received from Cannes?

GARY THOMAS> It was an extensive brief. Three words: Thank You Creativity. We sat down with Juan Woodbury, the creative director at HKX and VP Executive Producer at Leo Burnett Chicago, who is also the overall creative director for the Galas, and took it from there.

LBB> It’s an interesting task - to ‘capture creativity’. What’s your starting point for a task like that?

GT> Juan and the collective team needed to distil the brief down to a simple universal idea. We focused on the ‘spark’ – that first moment of understanding, inspiration, and creativity when the idea comes to life. Once we had that, we designed all our films around this core idea.

RODNEY DAVIS> For me, the starting point is to consider the task against the backdrop of our amazing in-house creative team. Are we up for the task? We bring all of the leaders together across all S8 companies led by the creative director to determine where our creative and technical capabilities intersect for this scale of a project. Then I step aside and let the talented team do what they do best – CREATE.

LBB> How does a project like this differ from a traditional commercial project?

GT> From a creative perspective, it's different. It's a rush of creative inspiration. It really comes down to being flexible, open, and working smart with the single goal to create something beautiful and engaging.

RD> Traditional commercial projects tend to include a substantially more detailed brief around a particular brand strategy. This type of project allows for considerably more creative freedom within our walls.

This is not to say we don’t get to be creative on commercial projects, but we definitely respect the role of creative directors and clients as being the lead. In this case, we were the lead on a project with depth and global scale. In our business we call these ‘passion projects’.

LBB> Last year’s campaign was very visuals-heavy, whereas this year is more focused on the people and their personalities. Why was that more fitting for the task at hand this year?

GT> The creative spark is unique to each subject, so this year had to be more focused on the people. David Droga, for example, gave us a real window into his creative process when he talked about the impatience and frustration he experiences when a good idea comes into being. He just wants it done and out in the world.

Artist and designer Adrian Lawrence created the visual landscape of David’s psyche. It’s abstract, eclectic and aims at illustrating his creative process. We shot the interviews and live elements in a serene, peaceful way in order to contrast his calm, cerebral demeanour with the intensity of thinking going on below the surface.

LBB> Why were the five-featured people perfect to star in the films?

GT> The thing we found with all these amazing people, who made time in their mind bogglingly busy days, was that they all have incredible enthusiasm and passion for their craft.

Judy John, in Toronto, is tremendously respected. ‘Like a Girl’ was a huge global phenomenon last year. She's funny and insightful.

Mark Tutssel is a creative giant in our world. As Global CCO for Leo Burnett and chair of Publicis Communications’ global creative board, he's probably responsible for more creativity happening in the ad world than any single human being on the planet. Yet at the core, when you speak to him, he's still an artist who gets excited about the perfection of a single idea.

Andres Ordonez is the CCO at BBDO Chicago. He's been in the role for only a few weeks, but he brings this great quiet blast of energy and a global perspective. Plus, he let us use him for stop motion animation in his office.

Michael Canning is a brilliant, insightful creative person in Sydney, who has the innate ability to draw out simple, engaging ideas.

And David Droga needs no explanation. He has great insights into the business and his own process on creativity.

LBB> There are still plenty of fun, colourful images integrated into the stories though. What was your inspiration behind these?

GT> There's real joy in creativity. When you have a great idea, when everything makes sense, there's no feeling in the world like it. We loved that each film was unique.

We were lucky enough to work with a variety of brilliant creative minds with a range of directors, both from within S8 and partner companies – like Decon, Head Gear animation and Blok Design, talented designers – and then our subjects. Not just our CCOs but people like Tanisha Scott, one of the top choreographers in the world and one of the most infectiously joyous people I've ever met.

LBB> You enlisted five different directors to produce the films – what does this approach add to the final production, as opposed to having the same director helm each film?

GT> Each film needed to have a unique voice. We wanted different visions from different storytellers. It makes a programme that is varied, visually rich, and constantly changing.

LBB> How was it for you to get into the minds of such esteemed ad creatives?

GT> A real privilege. We gave each creative the same brief: ‘What does that moment of inspiration look like?’ Each one came back to us with a genuine, considered response. On top of that, they gave us the time to capture this on camera to expand on the articulation of their ‘spark’ in a way that let us bring it to life visually.

LBB> You’ve created 25 films – how do you ensure each one is fresh but there is still the underlying theme of ‘Thank You Creativity’?

GT> Working with a variety of directors ensured there was freshness and uniqueness in each. Juan had the overview of the whole event, as well as the experience working with top creatives in the world. My role was to bring the directors and subjects together, and ensure a wide range of visual treatments. As much as we wanted each to be able to stand alone, the primary goal was to be seen together, without sound. They need to be compelling enough visually to engage 5,000 like-minded people at a party on the Riviera. No small task.

A common theme from our subjects was the notion of chasing or battling ideas when trying to be creative on cue. Since these films are intended as visuals first, we took the themes somewhat literally and put our creatives’ proxies in very active, stylised worlds. In the film ‘The Idea’ we portrayed an artist unlocking her own creative network, which sparks vast networks of other ideas.

‘The Choreographer’ presents Tanisha Scott creating dance moves. The film wasn’t about polished dance moves. It was her think pad – messy, personal, playful; the notion that a dance piece comes from repetition, slight variations and refinement.

A few years ago we worked on two films with the National Ballet of Canada that visually captured what goes through dancers’ heads as they dance. That was our inspiration for ‘The Troop’. We filmed a performance troop ‘flocking’ – a kind of improvised group movement – with the aim of creating a world that was completely in sync with the movements of the performers. The more in sync the group was, the more they affected their environment. We used a variety of visual techniques to bring the film to life.

GT> Logistics were huge on this project of global scale. Managing creative components over three continents has its challenges, especially on a project that relies on peoples' goodwill and talent. Each piece of the puzzle filtered back through our Toronto office of Smith.

GT> Shooting with the CCOs was something special. We went from flying into New York to spend two hours at Droga5 with David himself, to looking through Mark Tutssel's favourite book from art school at Leo Burnett Chicago. The list goes on, to sitting in our office kitchen with Judy John talking about our kids – that's something you don't do everyday.

LBB> Where can we expect to see the films at the festival?

GT> The films will be playing at the opening gala on Monday and the closing gala on the Saturday. Last year the Cannes Lions committee adored the films so much, that they played them throughout festival week on the iconic Palais screen. I'm hoping that will be repeated this year.

RD> The most exciting thing about a project like Cannes is that it taps into our entire team. It works because of our model and it’s exciting because we get to truly show the power of the S8 creative collective – all creative and technical artists under one roof.