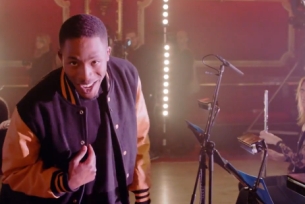 ‘There’s Joy in the Blend’ will see 20 videos of prestigious stars from two disparate art forms blended together. The unusual combination of spoken word poetic verse with orchestral accompaniments will be released on every working day throughout February. Subject matter for the poetry ranges from breaking news events and famous figures of the day, to shared collective emotions and reflections on modern city living.

The campaign, which is the first of its kind involving the Royal Philharmonic Concert Orchestra, builds on momentum created by the TV launch in November 2014. It celebrates the exciting potential of blending contrasting elements, not normally associated with each other, reflecting the J2O brand’s fusion of complementary ingredients.

It’s a marriage of tradition and modernity as the RPCO call on classical heavyweights from Elgar and Beethoven to be paired with words from the young ‘funk poet’ and rising UK talent James Massiah.

Limericks, haikus, sonnets and rapping are some of the lyrical stylings performed by the south London artist, who has been nominated for Young Poet Laureate and given readings on stages as diverse as Camp Bestival, Tate Modern, Houses of Parliament and an old factory in Peckham.

The RPCO is a firmly established part of the classical music world. The orchestra has played the great concert halls with opera luminaries like Andrea Bocelli and Luciano Pavarotti.

Brian Hackett, Marketing Manager for J2O, said: “When we were pitched the idea by TH_NK we loved it. It captures what J2O is about perfectly and juxtaposes the digital ambition of the TV campaign. The digital only nature of the campaign allows for greater agility, personalisation and reactivity with the content which aims to bring a little joy to people’s social experiences. There is a high-quality feel to these clips and I think our fans and followers will enjoy the results.”

Phil Wilce, Creative Director at TH_NK said: “20 original works in 20 days is hugely ambitious. But the creative and collaborative spirit of everyone involved shines through in every film. We're delighted with the results.”

Specialist in music videos and branded content, Zaiba Jabbar is the director behind the project and has previously worked on projects for Gabrielle Aplin, Florrie, Asos, Citroen and We Have Band. The 20 films were produced by production company Partizan.