Tetley’s Launches ‘Pass It On’ 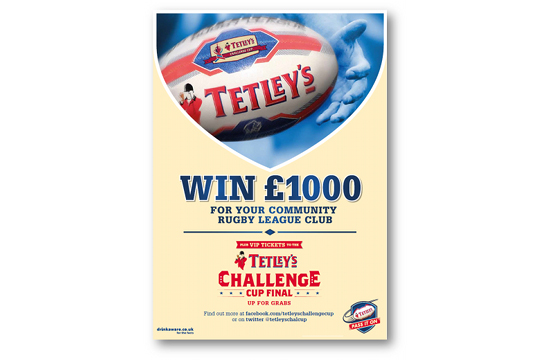 Tetley’s ‘Pass it On’, developed by The Marketing Store, is Tetley’s first story-driven social media campaign aimed to celebrate the sponsorship and drive awareness of Tetley’s and its commitment to grass-roots Rugby League.

The ‘Pass it On’ campaign will bring the time-honoured tradition of sharing a match story over a pint into the digital age, with the aim of attracting a new generation of consumers. Tetley’s is giving fans the chance to win VIP tickets to the Tetley’s Challenge Cup Final  by sharing their Rugby League stories on Facebook and Twitter, and if they mention their community club, the club could win £1,000.

Tetley’s allegiance with the RFL has secured Rugby League stars and legends including Ray French, Eorl Crabtree and Brian Noble to kick start the storytelling movement with their own stories via the official Tetley’s Challenge Cup Facebook and Twitter pages with #TetleysPassItOn.

To support Tetley’s commitment to grass-roots Rugby League, an ECRM campaign will encourage community Rugby League clubs to join the online conversation¬. The club with the most mentions each month will win £1,000, to be invested directly back into the club, be it a new kit or put towards club house renovations. There will also be a weekly ticket prize draw, to win Tetley’s Challenge Cup game tickets for anyone who enters the campaign.

As well as a strong online presence, the campaign will be communicated in the on and off-trade with POS and promotional packaging.

Tetley’s Brand Manager Dominique Shirman said: “The Tetley’s brand has had a long association with Rugby League and our sponsorship of the Tetley’s Challenge Cup presents another opportunity for us to connect with our consumers and rugby fans. This year we wanted a social media drive to connect and engage with a new generation of consumers. The Marketing Store has produced a very exciting campaign to take that interaction forward and also push our commitment to grass-roots Rugby League clubs.”

The Marketing Store’s Social Engagement Manager, Shelley Portet said “Rugby League has a strong community spirit built by years of storytelling, and the Tetley’s ‘Pass it On’ campaign positions Tetley’s as part of this tradition. This is a really exciting opportunity for the brand to take its sponsorship of the Tetley’s Challenge Cup into a more authentic space.”