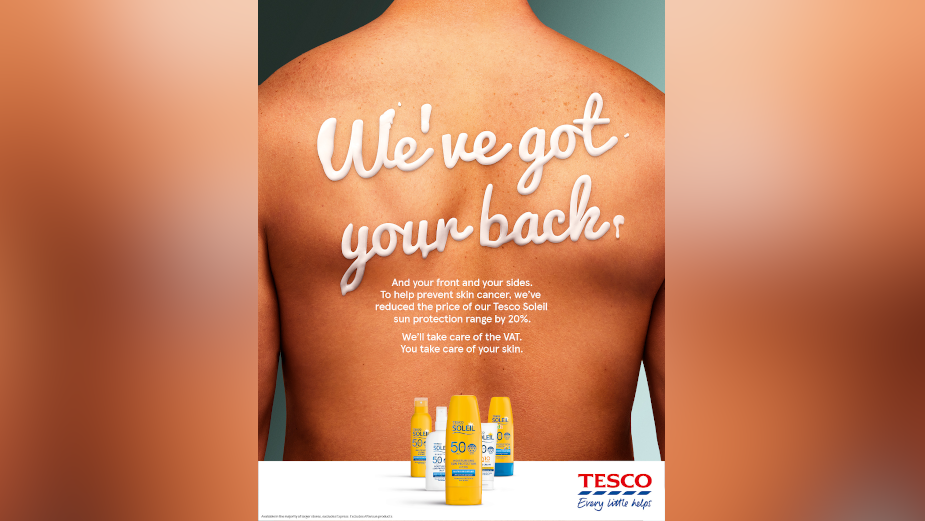 This week, Tesco has announced that it is taking care of the VAT on sun protection, by permanently reducing the price of these products in its own label range, Tesco Soleil, by 20%.

Cases of skin cancer are increasing despite up to 90 per cent of cases being preventable by being sun safe. However, research by Tesco3 reveals that over half (57 per cent) of UK adults said they think sun protection is expensive, with 29 per cent of those surveyed stating that they would wear sun protection daily if it was more affordable.

To launch the initiative, BBH London has created a campaign titled ‘We’ve got your back’ which will run as full page press ads in national newspapers, as well as across social media. The campaign was shot by photographer Emily Stein, who worked with BBH and Tesco on the retailer’s diverse skin tone plasters campaign last year.

It’s not the first time Tesco has launched an initiative like this. In 2017, the nation’s biggest retailer announced it would be reducing the cost for consumers by 5% on almost 100 of its sanitary products, to cover the VAT.

Uche Ezugwu, creative director at BBH, said: “By cutting the cost of their Tesco Soleil sun protection products by 20%, Tesco are making them more accessible to the British public. We wanted to create a campaign letting the nation know that Tesco have got their back.”

Alessandra Bellini, chief customer officer, Tesco said: “At Tesco, we believe sun protection is essential, and know that the cost of using it can add up. With the events of the past year especially, money may be tighter than ever for many families. We believe the safety of the nation’s skin should not be treated as a luxury, which is why we have permanently reduced the price of the sun protection products in our Tesco Soleil range by 20 per cent to cover the cost of VAT.”

In addition to taking care of the VAT, Tesco is also launching a partnership with national skin cancer charity, SKCIN, who will work together with Tesco to raise awareness of the importance of sun safety in the UK. As part of the initiative, they will support Tesco by training it's pharmacy colleagues, enabling them to confidently advise customers about UV exposure, skin cancer prevention and early detection, in addition to signposting customers to further information.