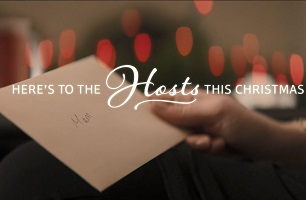 In the latest phase of Tesco Ireland’s and Rothco Christmas campaign, ‘Here’s to the Hosts’, the brand broadcasts the biggest surprise yet from Dubliner, Suzin.

On 21st November , young mum, Suzin, will break the news of her latest pregnancy to her family. In a heartfelt and emotive moment, Suzin sweetly apologises to her mum that she won’t be having any of her sherry trifle this Christmas. Seeing the ad on TV will be the first time her family will receive the happy news, which has been kept secret throughout the production. Suzin’s mum’s reaction to the letter will be revealed later in the campaign.

“We’re so excited for the commercials yet to come. The focus of this campaign is the unsung heroes of Christmas, the hosts. Christmas means so many different things to so many different people and it has been amazing to share such a breadth of touching real-life messages.” Explains Morgan Fiebig, Copywriter at Rothco. “It was a brave move for Tesco to re-appropriate the entirety of their Christmas ad space this year but it’s really driven engagement with the brand, seeing a whopping 66% engagement rate on Facebook.”

Racking up millions of views on social media, Rothco and Tesco have been busy recruiting new letters since the campaign launched on 1st November. They plan to give the wider public a chance to thank their own host in one of its TV ads - staying true to its promise of handing over Tesco’s advertising channels to the people of Ireland.

In addition to the unorthodox use of traditional channels, ‘Here’s to the Hosts’ will also use activations to bring new formats into the mix, including outdoor projections of letters and an interactive digital billboard in Dublin’s city centre, including a live social feed of the hashtag #ToTheHosts. Call outs on social media will invite the public to be part of these surprise-and-delight activations and hosts will even get a special mention as they’re doing their Christmas shopping, with select Tesco stores handing over their loudspeakers for guests to thank their hosts.

So far in the campaign, we’ve seen a number of moving messages shared with this year’s Christmas-hosts-to-be. A particular highlight saw a group from Carlow Men’s Shed (a community initiative that started in Australia to improve men’s wellbeing), thanking the chef amongst them for hosting their Christmas party in the shed itself.

Coming up in the TV campaign Tesco Ireland and Rothco will continue to celebrate hosts of all kinds, including those who cook Christmas dinner for a local rugby club, who hand out turkey sandwiches to the homeless, who work in the maternity ward on Christmas day, and who start cooking 40-50 Christmas cakes back in August. The characters on TV will be just as varied, from young kids, to burly men, to a festive veteran celebrating his 93rd Christmas this year.

A final surprise is in store for viewers on Christmas week (December 24th, 25th, and 26th). As the two month-long, intimate campaign ends, Tesco will offer a little twist on the idea.

Song: Here's To the Hosts