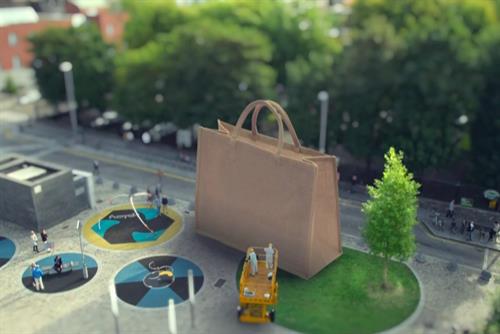 Tesco Ireland and Rothco have launched the humble ‘Big Can Be Good’ campaign to address negative perceptions of the large supermarket chain.

Led by a 60 seond TVC, the ‘Big Can Be Good’ campaign sees Tesco open its heart to Ireland with an honest brand manifesto. The company talks sincerely and humbly about what they stand for, presenting their intentions and commitments for the future.

‘Big Can Be Good’ takes the very thing that is often seen as a negative about Tesco – its size – and turns it on its head by demonstrating the benefits of that size to customers, suppliers and local communities. The result is an invitation for people to think about Tesco’s size in a new way.

“This campaign is about unveiling the hidden truths about Tesco as a brand,” comments Copywriter Bernie Martin. “When we started working with Tesco earlier this year, we really wanted to understand what made them tick. So we met colleagues, fruit and veg growers, farmers, the Tesco Quality Team, anyone who’d talk to us and ultimately, we discovered something we weren’t expecting – Yes, Tesco is a big machine but it also has a really big heart.

“The problem was no one seemed to know about all the good things they’ve been doing! With a revival in independent traders and craft produce, consumers have begun to shed a negative light on large corporations. ‘Big Can Be Good’ seeks to reveal the great behind-the-scenes work Tesco is doing to support Irish trade and communities.”

To bring the idea to life, Rothco and Tesco combined their thinking with a unique production technique called ‘tilt shift’, creating a toy town Ireland filled with big products, big benefits and big customer promises. Australian film director, Keith Loutit, who pioneered the style, worked on the production for the commercial with the team from Butter and Director Hadi.

Explaining the reasoning behind the choice of style, Martin comments: “We chose the tilt shift style because it carries a huge amount of charm, and we felt that it perfectly complemented the honest and humble tone of voice we were looking for. We also saw using large products and objects in each scene as an interesting way to highlight and emphasise all the things that Tesco are big on in Ireland. Not only that, it’s also a unique style that wouldn’t be confused with communications from any other supermarket.”

The Big Can Be Good campaign launched in October 2015 and will run across TV, press, outdoor, radio, online, POS, Tesco vans and bags through all Tesco Ireland communications for the coming communications.

Song: ‘Forever, Wherever’ by Andrew Jed