Tesco Ireland Makes Us Tear Up with Touching In-store Activation 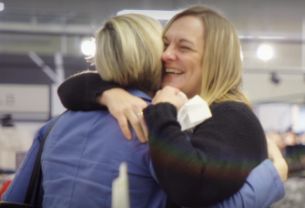 In the latest phase of its heartfelt Christmas campaign, ‘Here’s to the Hosts’, Tesco and Rothco have released an activation that will have audiences reaching for their tissues.
Media agency, Initiative, and digital agency, Wolfgang, have also worked together on a comprehensive media plan to support the emotive piece online.
This holiday season, Tesco has been all about celebrating hosts, the unsung heroes of Christmas. Its phase one TV campaign which launched on 1st November has seen 25 real people reading a special thank-you letter to a friend or family member for everything they do at Christmas to make it magical for those around them.
In its latest piece of content, Tesco hands over its in-store loudspeaker system to more real people, who surprise their hosts with a special, public thank you. The in-store activation sees hosts and guests alike gripped by emotion as Tesco’s loudspeaker system broadcasts just how much the Irish people appreciate their loved ones’ hospitality. There isn’t a dry eye in the store as the public space is transformed into an intimate, shared area by the moving expressions of thanks that fill its walls, including one young girl telling her grandparents that she hopes they’ll live ‘until 100 because Christmas wouldn’t be the same without them.’
So far in the ‘Here’s to the Hosts’ campaign, Rothco has celebrated hosts of all kinds, including those who cook Christmas dinner for a local rugby club, hand out turkey sandwiches to the homeless, work in the maternity ward on Christmas day, and start cooking 40-50 Christmas cakes back in August. The characters on TV have been just as varied, from giddy teens to burly men. We’ve even seen a young mother break the news of her latest pregnancy to her family in her TV ad, sweetly explaining to her mum that she won’t be having any of her sherry trifle this year. Next week we’ll get to see how Christmas hosts touch the very young to the very old, including a festive veteran celebrating his 93rd Christmas this year.
A final surprise is in store for viewers on Christmas week (December 24th, 25th, and 26th). As the two month-long, intimate campaign ends, Tesco will offer a little twist on the idea.
view more - Creative

Song: ‘Here’s To the Hosts’