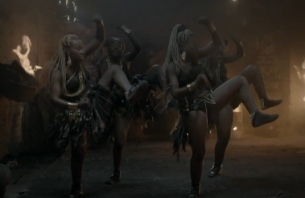 Skrillex Ragga Bomb, directed by Egg Films’ Terence Neale, was named Best Music Video of 2015 at Wednesday night’s One Screen Awards, produced by The One Club and held at Sunshine Cinemas in New York.

The global award was judged by the likes of Patrick Baron, the Dumb Ways to Die executive creative director, and RZA from The Wu-Tang Clan.

Now on over 40m YouTube views, Ragga Bomb features a turf-war in a post-apocalyptic Johannesburg, complete with trolley-surfing scavengers, glow-in-the-dark dancehall, and a final fight sequence you won’t see coming.

The One Screen win is just the latest in a string of accolades for the music video, which has been featured everywhere from Pitchfork to Rolling Stone and won three Golds at The Loerie Awards and a Bronze Clio Award.

Terence thanked everyone who worked on the music video, as well as Skrillex and his management for bringing the shoot to South Africa.