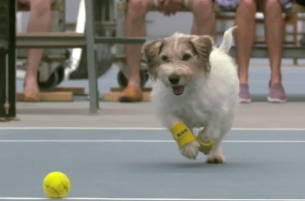 ASB Bank is celebrating its love of tennis by finding the best ball boys in the world for the ASB Classic international tennis tournament in Auckland, New Zealand. And who loves tennis balls more than Venus Williams? The answer may surprise you. Venus Williams takes on Svetlana Kuznetsova in an exhibition match like no other, ably assisted by three of the world’s biggest tennis (ball) fans: Oscar, Ted and Super Teddy.

Saatchi & Saatchi ECD Corey Chalmers said: “Dogs, tennis balls and global tennis stars. Surprisingly, a combination that hasn’t been put together before, something that Venus herself commented on when the dogs came out. Naturally we had a lot of fun making this and having Venus and Svetlana involved was a wonderful bonus for ASB and ourselves. We hope people will love this simple, charming idea as much as we do.”