We Are Social campaign for BNP Paribas ahead of French Open 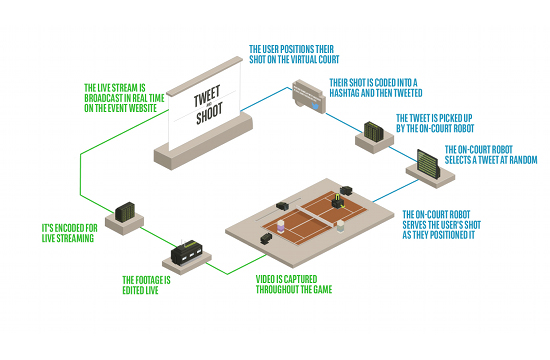 BNP Paribas is marking the 40th anniversary of its partnership with the French Open by pushing fans’ expectations to the limit with a groundbreaking on and offline global campaign.

On May 23rd, three days before the French Open commences, BNP Paribas will invite tennis fans across social media to play in an incredible game of tennis:

"Train Jo-Wilfried Tsonga, French No. 1 and World No. 8, through Twitter"

Designed and developed by global social media agency We Are Social, the ‘Tweet and Shoot’ event is a first in the history of sport and mass participation - a social media-controlled robot that launches tennis balls at Jo-Wilfred Tsonga live on a tennis court.

On 23rd May, the social media users will be able to go to http://tweetandshoot.wearetennis.com and log-in via Twitter. They then will drag-and-drop a tennis ball on a virtual on-screen tennis court to adjust the positioning of their shot to challenge Jo-Wilfried Tsonga. The user’s shot is then encoded as a hashtag and placed into a Tweet from them, to which they can add a personal message to Tsonga before it is sent.

The on-court robot, connected to the internet and Twitter via 3G, will then select users’ Tweets at random and fire tennis balls at Jo-Wilfried Tsonga, with each shot mapped precisely to the positioning of each user’s choosing.

A group of 40 ‘VIP Twitter Trainers’ will be selected from BNP Paribas’ own social communities through a competition running on the Tweet and Shoot website (http://tweetandshoot.wearetennis.com) from the 15th to 22nd May. Fans will be asked to send an encouraging tweet to Jo-Wilfried Tsonga ahead of the French Open to enter a prize draw to become one of the ‘VIP Twitter Trainers’.

The winners will be guaranteed that their tennis shots will be fired at Jo-Wilfried Tsonga, instead of taking the chance of being randomly selected by the robot on the day of the event.

On May 23, at 1600 GMT, when Jo-Wilfried Tsonga will take to the tennis court and take on the shots fired at him by the robot, internet users will be able view the event live on a live-stream at http://tweetandshoot.wearetennis.com.

Jo-Wilfried Tsonga said: "I've always loved a challenge and when BNP Paribas asked me to take part in a world first experience to mark its 40 year partnership with Roland-Garros, I was immediately intrigued. Being trained by fans on Twitter a few days ahead of the French Open – what a daring challenge!

"I'm looking forward to taking on the technical prowess of Twitter users. Hopefully, sharing this experience with all these tennis fans will bring me luck for the tournament."

This innovative and all-inclusive challenge demonstrates the unique positioning of BNP Paribas in its 40th anniversary of partnership with the French Open. Find all the live action on http://40ans.wearetennis.com.