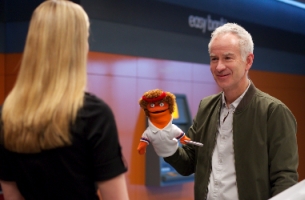 Four new spots continue the campaign that launched earlier this year with comedy veteran John Cleese, highlighting even more ways Bankwest are making banking easier.  The commercials use McEnroe’s well known rage to demonstrate the frustrations people have with banks, only to find that the ever unflappable Katie, has a simple and easy Bankwest solution to the problem.

John McEnroe says he was happy to be involved in the campaign because – “The Bankwest association makes sense to me because I believe in better service and making things easier for the customer”.

Says ECD Julian Watt,  “We launched the campaign with Cleese, who’s classic grumpy.  But this time round, we wanted someone more volatile, more impatient and more of a benchmark for where the bank has set their goals to satisfy the most demanding of customers. John, as always, over delivered.”

Paul Vivian, Bankwest General Manager of Customer Communications and Brand, says: "In this next iteration of our brand campaign we are thrilled to be introducing a new grumpy character and hard-to-please customer in John McEnroe, who has his perceptions changed by Katie, our fantastic Bankwest colleague.  John was great fun to work with and really lived the part, allowing us to use his frustrations, even when they were channeled through a rage puppet, to demonstrate our ‘making banking easier’ proposition.”