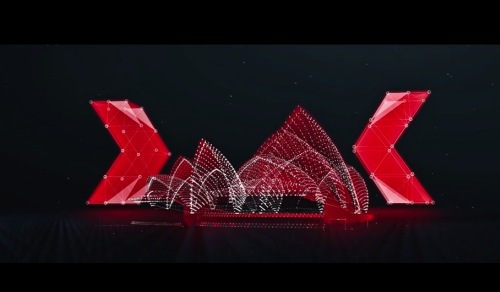 Sydney’s newest production company has launched with a bang delivering a vibrant live projection and digital broadcast package for the recent TEDx Sydney 2014 conference. The interstitial stage and screen graphics breathed new life into one of the world’s most iconic event brands.

The goal was ambitious: to create a package of compelling visuals to introduce the sessions, speakers and performers and represent the ideals of TEDx; the propagation of great ideas, storytelling, creativity and actionable innovation – all in an introductory 90 second motion design piece and its related graphics throughout the conference.

Enhanced by Rumble Studio’s  sound design, the creative by Common reinterpreted Australian iconography within the visual elements of the TEDx logo – from the Harbour Bridge to the ubiquitous Hills Hoist, the Sydney Tower and finally the Opera House.

With animation and VFX by Mindconsole the result was a distinctively Australian one yet utterly on brand and set the tone for what is a calendar highlight for audiences clamouring to the mind bending ideas for which the global conference is renowned.

Supplying 40 deliverables in a three month turnaround was only the beginning of many challenges however Actual’s director, Tim Kindler said it has been a gratifying project.

“It was definitely a highlight seeing the finished product up on the 40 foot screen on the day,” he said. Another was working with both Mark Stott and with Mindconsole throughout the creative process and of course, with Rumble on the sound design as the final versions of the main piece took shape. They really took the cake and all collaborators in this project truly went above and beyond.”

Johnny Green from Rumble Studios said it had been a dream job.

“It was exclusively vision and sound so we worked closely to compliment the luscious visual content,” he said. “A 40 foot sized screen deserved 40 foot sized sound, so I got out my musical tape-measure and started calculating how large the bass frequencies needed to be. The Opera House recital hall gave us a great chance to throw sound around the room and keep it fairly sparse, which added to the large-scale feel.

Based in Sydney, Actual is an emerging creative production studio to watch. It focuses on creative concept development and visual storytelling predominantly within the arts, design and creative industries. The work is generally highly stylised as well as fiercely and proudly collaborative.