Tech We’re Looking Forward To Working With In Music 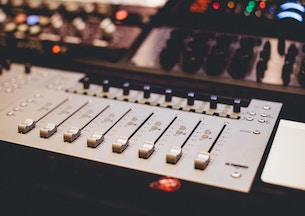 Of course the two are inextricably linked, music and technology, the latter shaping the former in how it is both created and consumed.

Now with a burgeoning mass of technology converging with the entertainment industry, we’ve picked the most exciting technologies in music that we soon hope to use casually and professionally.

Put very bluntly, music is a pattern of soundwaves, and often a not very complicated one in popular music’s case, so surely a computer can create music using algorithms? Yes. In fact, this was first done as long ago as the 60’s by inventor Ray Kurzweill. The other and perhaps more pertinent question is: Can computers create music that humans will actually consume? Answer: Watch this space. Music tech startups such as Amper Music and Jukedeck seem to have successfully developed software that procedurally creates impressive royalty-free music for picture. They primarily focus on YouTube content but have a view to supply commercial productions (film & TV) as their tech improves.

Even more impressively AI music-focused record label, Flow Records, are successfully creating commercial music using AI composition alongside existing human artist contributions. Below you can see the improvement in their tech in just one year, moving from an impressive experiment testing the water (Daddy's Car), to the first ever AI created commercial release, with the lead single (SKYGGE 'Hello Shadow') accruing over 1 million Spotify listens to date.

Music startups using AI technology aren’t all trying to replace human composers however, as Amper Sound CEO, Drew Silverstein, states: “As AI and humans collaborate to make the future of music, we want this collaboration to enhance the creative process in an additive way, not to displace it”. Australian startup, Popgun, acts as a sort of call-and-response duet tool for composers by guessing what might come next after a musical phrase is inputted. They're next goal is to accompany a human in real-time.

There are a few techniques that transfer musical ideas from brain to computer, some which translate vocals into MIDI data for a selected virtual instrument to read. Vochlea Music takes it one step further by enabling you to control the instrument you use with the noise you make. For example, if you beatbox into the mic you’ll trigger drum samples automatically, or create a bass line by humming.

“Hey Siri, remind me to listen to “X”’s new album when I get home” might be something we’ll be hearing a lot more on our commutes. Indeed, since the introduction of Sonos, and subsequently home assistants, music played out in the household has vastly increased. I like this trend!

Those at Amazon are teaching Alexa the difference between fast and slow, new and old songs, to provide us the quickest route possible to engage with the music we're in the mood for at home. Continuing to add layers of knowledge like these could even help us as music supervisors further down the line...

The faith in VR may be having a bit of a wobble, but it isn’t stopping developers from creating some potentially game-changing concepts in the live music sector. Melody VR is attempting to be the first on-demand VR gig service. They have recorded gigs and festivals in 360-degree video from multiple angles, whilst also creating bespoke intimate videos filmed in environments specially designed for a 360-degree perspective.

On the slightly more trippy side, The Wave VR livestreams concerts and offers interactive features that enable users to touch equipment or dance in the landscape.

The potential of Augmented Reality now exceeds what VR is expected to achieve. In my mind, the ability to enhance an actual experience rather than simply mimic one is more favourable, especially within the music space. The possibilities to improve live experiences, music creation and education are very exciting. We can already learn to play piano with our very own holographic teacher, via Chinese app Teomirn for the Microsoft HoloLens.

Probably the most secretive yet talked about startup in this field, Magic Leap, are championing Mixed Reality: a method for interacting with virtual objects within one's natural environment through wearable hardware. With the oppurtunity for endless applications, Magic Leap has attracted huge investments from many areas, including music. Avant-garde mucisians, Sigur Ros, are collaborating with Magic Leap to create a Tonandi, an interactive musical ecosystem app working through the startup’s headset set for release this year.

3D sound tricks the brain into thinking sounds are coming from any position in a full surround sound sphere, using various sciencey techniques such as Ambisonics and head-related transfer functions (HRTF’s). In relation to the two above technologies (VR & AR), the main obstacle for 3D sound has been the lack of processing power to render sound on the fly, creating a believable interactive experience. Google’s development kit ‘Resonance Audio’ hopes to overcome this.

Everyone’s banging on about blockchain, but for good reason. It’s set to change many industries and already has. Here’s a brief definition for those understandably in the dark on this: Blockchain is a database model that transparently and accurately distributes money to the relevant parties. Most famously, it is the underlying model to operate on for cryptocurrencies such as Bitcoin. It can be applied to many subjects however, such as rights management and royalty payment, as a public ledger.

There are three obvious domains for blockchain in the music industry: Metadata, Rights, Payments.

Metadata: Including unchangeable, accurate and detailed information on each song when entered such as the creator, lyrics, artwork and instruments would prove exceedingly useful for music searches.

Rights: Providing clear, appraised information on whom the rights owners are per song, ironing out any ambiguities. Again, a great tool for music supervisors when conducting the sometimes laborious task of uncovering rights holders’ identities.

Payments: Transparent payment records of royalties to rights holders. This will deter music companies from withholding any money.

Companies like Ujo Music have already attempted to instigate change in the way money flows from the consumer to the creator using blockchain. They worked with Imogem Heap and producer RAC to release their own respective records where fans could buy licences to download, stream, remix and sync the song, with their payments automatically split between all credited creators.

Moreover, important bodies within the world of music rights are recognising the potentially paradigm shifting effect blockchain can have on royalty distribution, with some of the biggest collection societies (ASCAP, SACEM, PRS) working on a blockchain-based unified industry approach.