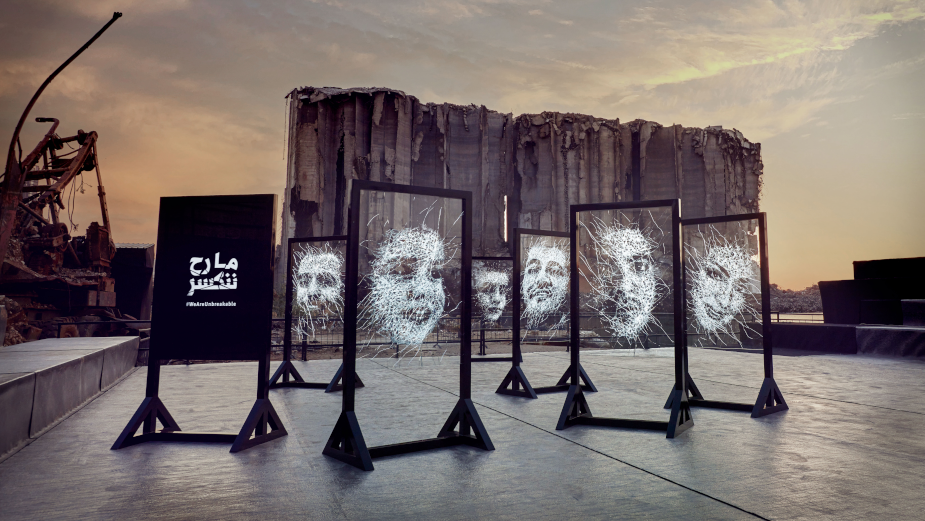 A year after the August 4th explosion in Beirut – one of the biggest non-nuclear blasts in history - there are still no answers about who was responsible. Families have been left to endure an endless purgatory of mourning and rebuilding, as they try to piece some sense back into their lives without any sense of accountability.

MTV, in partnership with regional advertising agency TBWA\RAAD, decided it was time to break the silence, launching the #WeAreUnbreakable campaign, in which victims were powerfully depicted in glass form to demand justice from officials.

In collaboration with the art historian and gallerist Laurent Marthaler, Swiss shattered glass artist Simon Berger flew all the way to Lebanon to be part of the initiative, which he deemed close to his heart. Using his unique tool, Simon deployed the force of his hammer onto sheets of glass recycled from the explosion, creating portraits of the victims to utter a loud and clear scream for the truth, for justice. Simon visited the explosion site and several of the victims’ family members to pay his condolences and find out more about the stories that hid behind the faces he was bringing to life.

“I am very delighted to have visited Lebanon for the first time, a beautiful city filled with good and genuine people,” said Simon Berger. “Visiting the explosion site, meeting the families of the victims, hearing their stories, and sharing their pain was a very emotional experience for me, one that will remain in memory for life. I truly hope that my art will contribute to bringing justice to the victims, their families and the people of Lebanon because they deserve it.”

The portraits he created will ‘take a stand’ on one of the country’s most renowned television shows, ‘Sar el Waaet,’ hosted by journalist Marcel Ghanem, during a special episode aired live from the site of the explosion on August 4th at 8:30 pm Beirut time, in memory of the victims.

The world will be faced with the chilling presence of the victims in front of the port silos, in hopes that this ‘glass demonstration’ will contribute to bringing justice to life.

The portraits will then be exhibited at Beit Beirut, also known as the ‘Yellow House’ - a historic landmark that celebrates the history of Beirut, to be part of the museum’s permanent collection, as a constant reminder of the demand for justice.

Habib Ghobril, general manager at MTV, said: “For an entire year, MTV Lebanon has been trying to shed light on the unknown, to intimidate politicians and question judges. On the occasion of the first commemoration of a day that has forever changed the lives of the Lebanese people, we decided to call for the truth in our own special way - to state boldly and clearly that no matter what breaks, we refuse to let go of the truth; we will continue to pursue justice for the victims. Lebanon and its people are unbreakable”.

Walid Kanaan, chief creative officer at TBWA\RAAD said: “’We are Unbreakable’ took us on an intense and very emotional journey - one we felt wholeheartedly compelled to take. We would like to thank Simon Berger for his generous and thoughtful contribution; it was an honor to have him in Beirut. Putting talent and art at the service of such a strong cause gives creativity a much more meaningful purpose. We hope to see justice served at the soonest possible time. Until then, #WeAreUnbreakable.”